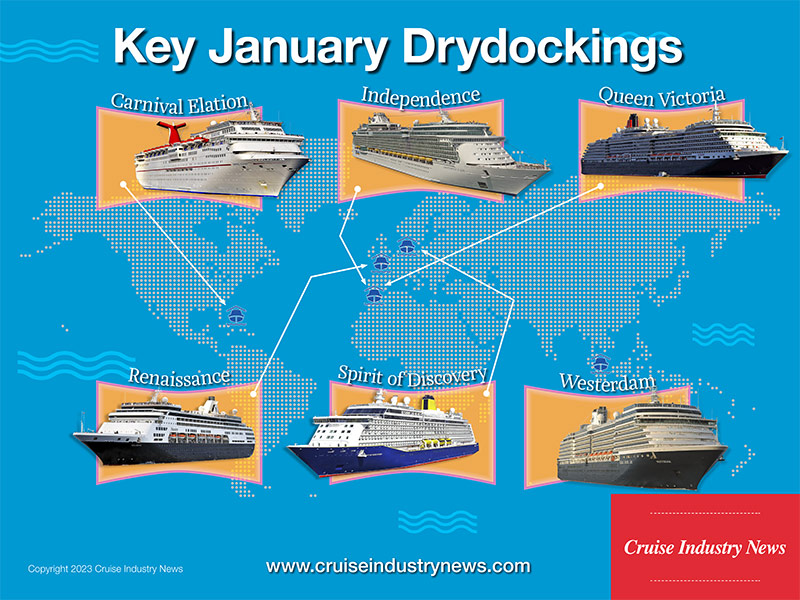 Key cruise ship drydocks in January include quick work on a few mainstream ships and the continued conversion of the former Maasdam into CFC’s Renaissance for its start up targeting the French cruise market.

For more insight in the cruise ship drydock and repair market, see the 2023 Drydock and Refurb Report by Cruise Industry News.

The Carnival Elation is undergoing a scheduled drydock later this month. Currently based in Jacksonville, the 1998-built vessel is set to go through routine class work, in addition to hotel and technical maintenance, before resuming service on Feb. 11.

Royal Caribbean’s Independence of the Seas is also scheduled for a routine drydock this month. Currently on its way to a shipyard in Europe, the 160,000-ton vessel will undergo class work, technical improvements and hotel upkeep. After returning to North America, the Independence is set to resume service on Feb. 17.

The Queen Victoria underwent emergency repairs in Spain earlier this month, as part of an unscheduled drydock. According to the local media, the three-day shipyard visited occurred during a regular cruise, with passengers remaining onboard while working was being carried out on one of the ship’s propellers.

The Spirit of Discovery is spending most of January in a European shipyard. After undergoing routine maintenance, in addition to class work, technical upgrades and hotel upkeep, the Saga Cruises’ vessel is set to resume service on Feb. 2.

Another ship undergoing routine maintenance and class work in January, the Westerdam is set to be drydocked in Asia. Marking Holland America’s return to the region, the 2004-built vessel is welcoming guests back in Singapore, on Feb. 3.

Renaissance’s long drydock is continuing to progress in January. After nearly three years out of service, the former Maasdam is being prepared to launch service for CFC, a new French cruise line.

Undergoing extensive technical upgrades and hotel renovations, the 1,258-guest vessel is set to debut in May