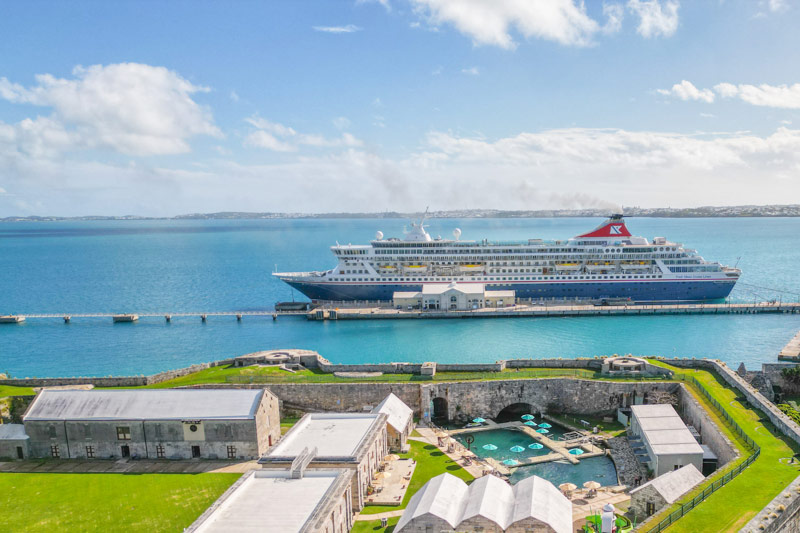 Fred. Olsen Cruise Lines’ Balmoral arrived in Bermuda on January 15, marking the start of the first of three 2023 grand voyages, according to a press release.

“We’re incredibly proud of all of our grand voyage itineraries, each is hand-crafted with a selection of truly exceptional highlights, from a chance to visit the Taj Mahal, to witnessing the impressive modern cityscapes of Singapore and bustling markets of Mumbai,” said Martin Lister, head of destination experience and itinerary planning at Fred. Olsen Cruise Lines.

“Our smaller ships allow us to truly venture away from the well-trodden tourist path, and delve deeper into the history and culture of some truly fantastic ports,” he said.

“Guests currently on Balmoral’s 78-night adventure have chances to visit the Galapagos islands to spot native wildlife, cruise the world-renowned Panama Canal, witness the rugged icy landscapes of Antarctica, explore the ‘Lost City of the Incas’ on an overland tour to Machu Picchu, and even cruise the Chilean Fjords.”

The Balmoral embarked on the 78-night Exploration of South America and the Antarctic cruise departing from Portsmouth, England on January 5 and will be calling in destinations including Peru, Uruguay, Chile, Brazil and for the first time in Fred. Olsen’s history, the Antarctic. The ship’s grand voyage will end in Southampton, England on March 24, 2023.

The Borealis will also be embarking on a grand voyage departing in February. The Around the World in 80 Days voyage will depart from Liverpool, England on February 21 and will make its first call in Lisbon, Portugal on February 23. The trip allows guests to follow in the footsteps of the fictional explorer Phileas Fogg including opportunities to see Japan’s cherry blossoms or visit the tomb of Tutankhamun on the 100th anniversary of its opening.

The Borealis will visit countries including Portugal, Egypt, India, Japan, Hawaii, Costa Rica, Colombia and Singapore to name a few.

The third grand voyage is scheduled for November 2023 when the Bolette will set sail on a 93-night The Intrepid Beauty of Africa and the Indian Ocean cruise. The ship will depart from Southampton, England on November 19 and will make its first call in Tangier, Morocco. Among the countries that the Bolette will visit are Malta, Egypt, Saudi Arabia, India, Madagascar and many others.