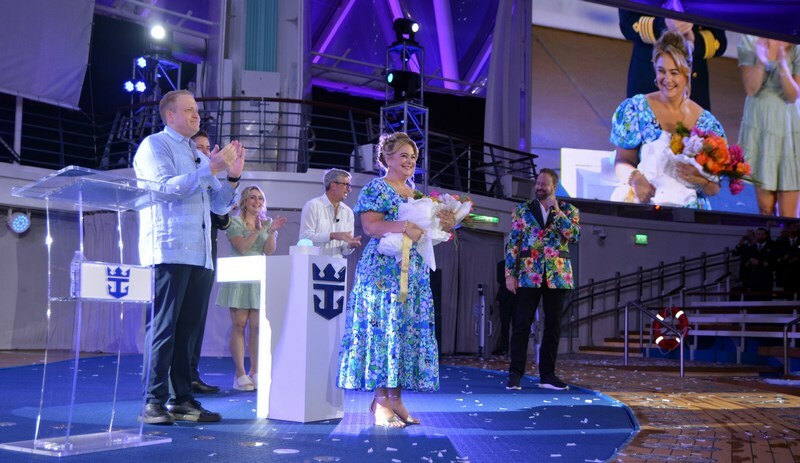 Royal Caribbean International officially welcomed Wonder of the Seas into the family on Friday at Port Canaveral.

The cruise line’s latest ship was named by its Godmother and Wonder Mom Marie McCrea from Pennsylvania. The evening ceremony also marked the start of a new chapter for Wonder as it makes waves as Port Canaveral’s new, year-round family vacation, the company said.

Royal Caribbean executives and teams, families, friends, travel advisors, the cruise line’s partners and more came together on board the world’s largest cruise ship to celebrate the occasion.

In the time-honored role of Godmother, Marie bestowed a blessing of safekeeping on Wonder, its crew and the millions of families who will make lifelong memories on board in the years to come. On stage with Marie were Royal Caribbean Group President and CEO Jason Liberty, Royal Caribbean International President and CEO Michael Bayley, and her daughter, Allie, who nominated her mother for the role as part of a nationwide search started by Royal Caribbean on Mother’s Day.

“Wonder of the Seas exemplifies Royal Caribbean Group’s focus on unparalleled innovation, sustainable cruise ship design and our commitment to delivering world-class, memorable vacations, responsibly,” said Jason Liberty, president and CEO, Royal Caribbean Group. “This milestone represents the culmination of millions of hours of work, from the most innovative minds in the industry, to deliver the world’s latest wonder.”

Designed for memory-making from end to end, Wonder inspires awe and adventure in kids and vacationers of all ages with feats and experiences across eight neighborhoods – a first in the revolutionary Oasis Class. To find the Godmother to match, Royal Caribbean took to TikTok and launched the #SearchforWonderMom contest, which saw 16,000 videos posted and 10.6 billion hashtag views.

The search was complete when the cruise line heard Marie’s story, one of a devoted mother, wife and cancer survivor whose spirit inspired her family and those around her to set out on adventures and enjoy every moment together despite the hardships they faced.

“It was an honor to officially welcome Marie, and Wonder of the Seas, to the Royal Caribbean family,” said Michael Bayley, president and CEO, Royal Caribbean International. “Marie’s story is one of incredible strength and family memories to last a lifetime, and those are the types of memories we’ve committed to creating with our guests and crew on every Royal Caribbean ship for more than 53 years. Wonder is the adventure of all adventures that combines what families know and love on our revolutionary Oasis Class ships with brand-new experiences, and it’s already delivered memorable vacations to more than 180,500 guests since first setting sail in March.”