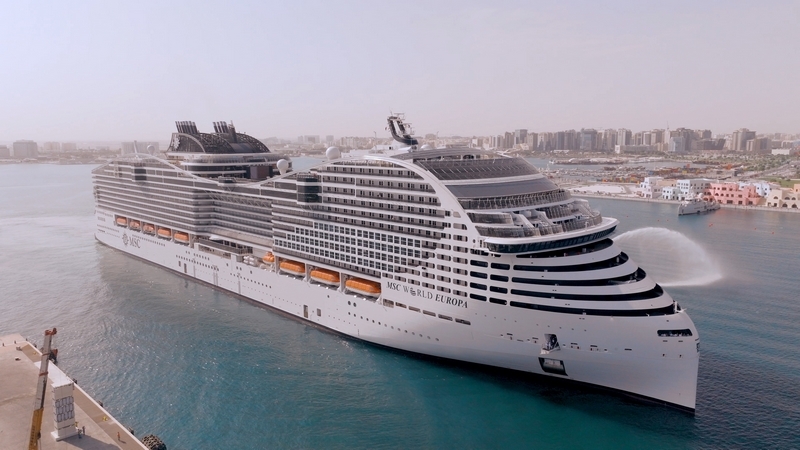 The MSC World Europa is officially entering service this week. After debuting as a hotel ship during the FIFA World Cup in Qatar, the new MSC Cruises vessel kicked off its maiden cruise on Dec. 20.

Marking the start of the ship’s inaugural season in the Middle East, the four-night repositioning cruise ended in Dubai.

The UAE city is serving as the homeport for the LNG-powered vessel, which will offer seven-night cruises in the region, through late March.

Before returning to its homeport, the MSC World Europa also sailed to Dammam, an unusual cruise destination located in Saudi Arabia.

Starting in April, the 205,700-ton ship is sailing a year-round schedule of cruises in the Western Mediterranean.

The ship’s regular seven-night itinerary features visits to the Italian ports of Genoa, Naples and Messina, as well as Valletta in Malta, Barcelona in Spain and Marseille in France.

First in a new series of four ships known as World Class, the MSC World Europa was built at the Chantiers de l’Atlantique shipyard in St. Nazaire, France.

Now the largest ship in the MSC Cruises fleet, the 5,400-guest vessel introduced several firsts to the company’s fleet, such as its LNG-powered propulsion system.

According to MSC, the cleaner burning fuel reduces greenhouse emissions by up to 20 percent and reduces nitrogen oxides by 85 percent.

On the hotel side, the 333-meter-long ship also offers many new features, including The Venom Drop @ The Spiral – the longest dry slide at sea, with a 11-deck drop.

Other highlights comprise The Promenade, a 104-meter long, seven deck-high outdoor area which opens onto the aft of the ship. In addition to sea views, the space features entertainment, retail and al-fresco dining.