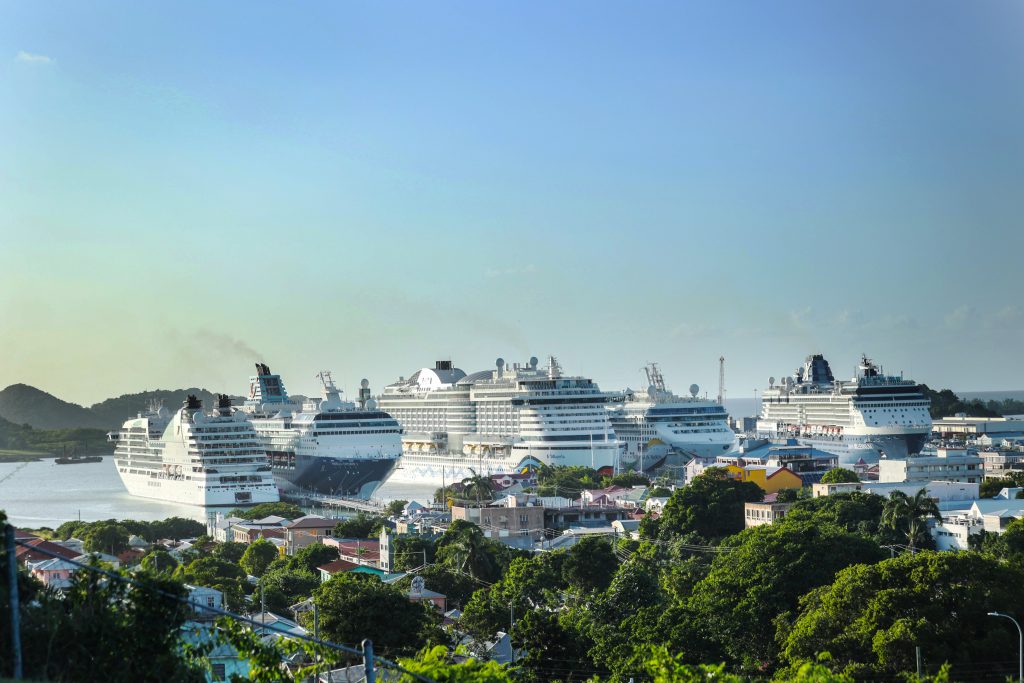 On Tuesday, December 6, 2022, Antigua & Barbuda celebrated the official opening of the 2022/2023 cruise season at the fifth berth at St. John’s Harbour.

Five ships were in port on this special occasion, according to a press release, a which also served as the formal opening ceremony of the fifth berth, which was completed in December 2020.

The Seabourn Ovation and Marella Explorer were berthed at the Nevis Pier, while the Norwegian Dawn and AIDAperla were moored at the Heritage Pier.

The Celebrity Millennium was docked alongside the fifth berth. Together, these vessels brought an estimated 6,700 passengers to the port.

Several speakers including Prime Minister Gaston Browne, Hon. Charles Fernandez, Mrs. Dona Regis-Prosper, General Manager of Antigua Cruise Port, Mr. Colin James, CEO of Antigua and Barbuda Tourism Authority and Mr. Percy Rhoden, Manager of Meridian Construction Co. Ltd., and Blue Ocean Marine Company, reflected on the progress of the port and the resilience of the industry post-COVID-19. They also expressed excitement and optimism about the nation’s cruise tourism outlook and the growth of the partnership between local stakeholders and the cruise industry.

“Thirty-three months, ago, on March 14, 2020, we received the dreadful news of the closure of the cruise industry, after only 4 months of operations in Antigua,” Regis-Prosper shared. “The weeks that followed were amongst the most challenging that I had experienced in my long career in this industry – cancellation after cancellation of cruise calls, passengers stuck at sea and crew desperate to get home to their families. Locally my team wondered about their jobs and tenants about their businesses and livelihoods.  The prospects of a restart looked daunting. However, I knew that this industry was down and not out. After all, it had survived 911, financial crises, impact of hurricanes, storms, and many other setbacks.

“And 28 months ago,” she continued, “on July 15, 2021, we reopened the cruise industry with a call from the Windsurf welcoming a modest 85 passengers. The rest of the year would continue to be challenged with variants, changing protocols and of course cancelled calls. However, it was those months where I personally experienced excellence in leadership and teamwork, and must take the opportunity to thank Hon. Charles Fernandez, and team Tourism. This cruise season, we are expecting not only transit calls but for the first-time scheduled homeporting calls for one of the world’s largest cruise vessels, Arvia, beginning in January 2023. By the end of the peak season, October 2022 – April 2023, Antigua Cruise Port will have welcomed over 600,000 passengers and during the 2023 summer months over 30,000 passengers!”

Hon. Charles Fernandez noted that the combined construction of the fifth berth and dredging of the harbor basin were completed in December 2020. He added that St. John’s Port had increased in capacity to not only accommodate five vessels in port simultaneously, but also the largest cruise vessels in the world. The pre-pandemic numbers totaled approximately 800,000 passengers annually but upon the agreement held with Global Ports Holding, the destination would be able to serve as many as 1 million passengers per year due to the completion of the fifth berth.

Minister Fernandez also commented that the Arvia would deliver a projected 1,000 passengers to port per turn from January to March 2023. After this period, homeporting operations would resume in November 2023.

Emerald Cruises and SeaDream are also scheduled to commence homeporting in November 2023. He explained that the terminal building would be completed by November 2023 and would adequately facilitate transit and homeporting operations. Its unique design would feature over 10,000 square feet of space which would comfortably accommodate areas for Customs, Immigration, Port Health, security screening, luggage handling, restrooms, and convenient shopping