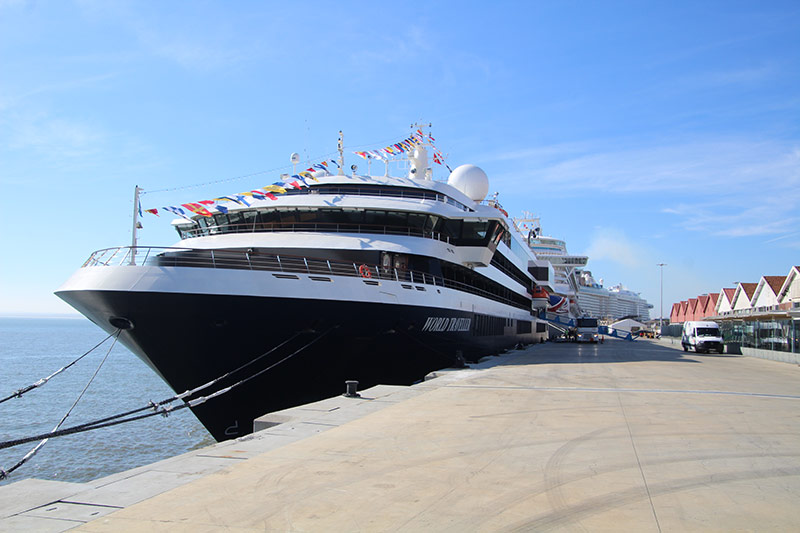 Atlas Ocean Voyages is adding a second ship to its fleet this week as the new World Traveller sets sail on its maiden voyage.

After being delivered by the West Sea shipyard in October, the 200-guest expedition vessel is kicking off a nine-night voyage to Antarctica in Argentina.

Sailing roundtrip from Ushuaia, the exploration cruise navigates the Drake Passage and includes planned visits to the South Shetland Islands, the Antarctica Peninsula and more.

After additional expeditions in the Frozen Continent, the 9,300-ton vessel is set to reposition to Europe in April.

During its debut season in the region, the Traveller offers seven- to ten-day voyages to the Western Mediterranean sailing from ports in Portugal, Spain, France and Italy, such as Lisbon, Barcelona, Seville, Nice and Civitavecchia.

In August, the ship arrives in the Arctic for three polar expeditions before offering an Iceland circumnavigation.

The Traveller then charts a southbound course via the British Isles, Ireland, France, and Spain to arrive in Lisbon in October.

Upon completing its European deployment at the Portuguese capital city, the ship is set to return to Antarctica for a second season of polar expeditions in the Southern Hemisphere.

Built in Portugal, the World Traveller is Polar Category C- and Ice Class 1B-certified and, according to Atlas Ocean, caters to travelers “with a passion for exploring iconic and off-the-beaten-path places.”

The yacht-style vessel offers “five-star comfort,” the company added, in a “stylish and intimate” setting complete with an “all-inclusive onboard experience and luxurious accommodations.”

Fourth in a series of expedition ships built for Mystic Cruises, the World Traveller joins the World Navigator in the fleet of Atlas Ocean Voyages.

Serving the North American and other English-speaking markets, the cruise brand also plans to add three more 200-guest sister ships to its fleet through the end of 2024.