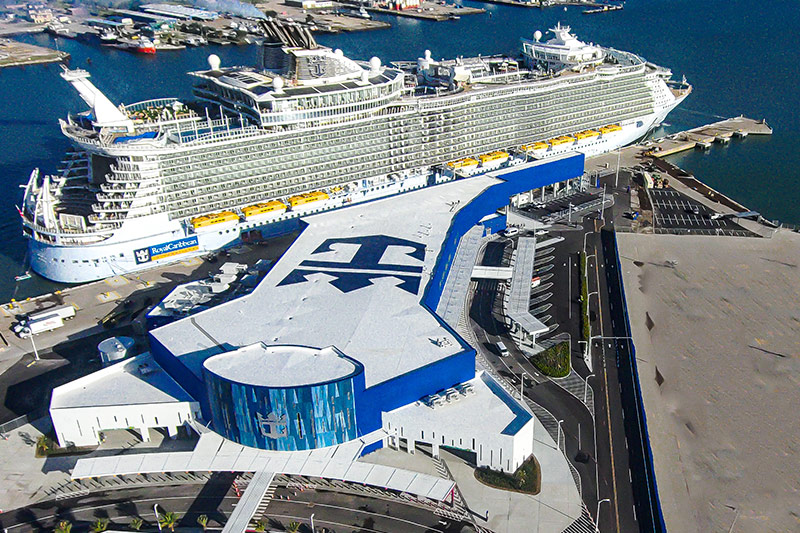 Royal Caribbean Group’s new cruise terminal in the Port of Galveston is officially open, with a ribbon-cutting ceremony held at the new facility on Wednesday morning with the Allure of the Seas docked in the port.

Generating 100 percent of its needed energy through on-site solar panels, the 161,334-square-foot facility is set to become the first in Texas to achieve LEED Gold certification.

Marking the arrival of the Oasis class to Texas, the vessel departed from its new homeport for the first time on Wednesday afternoon.

Launching a series of Western Caribbean cruises departing from Galveston, the Royal Caribbean International ship is sailing on a promotional short cruise before kicking off a schedule of week-long cruises to Mexico and Honduras next Sunday.

The program features a regular itinerary that includes visits to Cozumel, Costa Maya and Roatán.

One of the world’s largest cruise ships, the Allure of the Seas has capacity for over 5,400 guests.

Following the Oasis of the Seas, the 220,000-ton vessel introduced a groundbreaking design that is highlighted by features such as the Central Park, a park with real plants, surrounded by shops and restaurants.

The 2010-built vessel also has its public areas divided in seven different neighborhoods, each one of them has a different appeal. The BoardWalk, for instance, was inspired by a seaside pier and features a carousel, carnival games, in addition to retail outlets and eateries.

With its new terminal in Galveston, the Royal Caribbean Group will be able to accommodate up to 630,000 guests in the port per year.

The $125 million project saw construction started in 2021 and is a collaboration between Royal Caribbean International, Ceres Terminal Holdings, LLC and the Galveston Wharves.

In addition to the Allure, a second Royal Caribbean International vessel, the Adventure of the Seas, is set to offer cruises from Galveston during the 2022-2023 season.

In November 2023, the Harmony of the Seas is set to take over Allure’s program, offering similar week-long itineraries in the region.