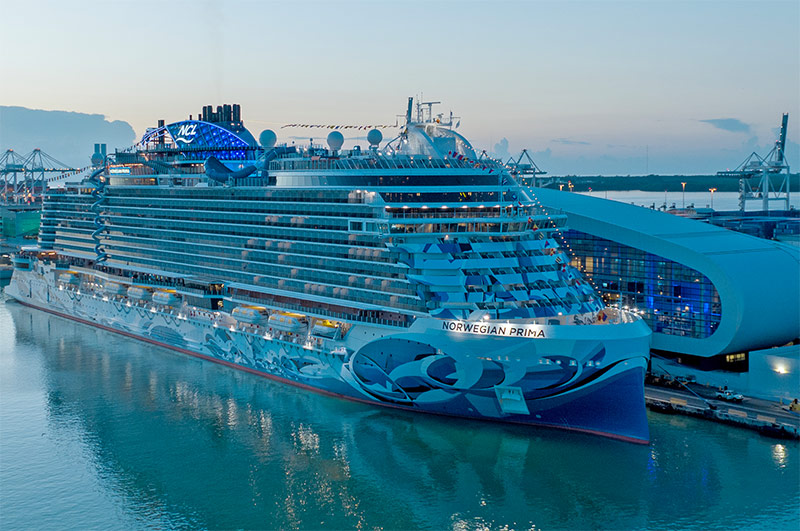 The Norwegian Prima has arrived in Miami for the first time.

According to a press release issued by Norwegian Cruise Line, the company’s newest ship is now set to embark on two inaugural voyages departing from the port.

Following an inaugural journey that began with a christening event in Reykjavik, Iceland in August and continued with inaugural sailings from New York, and most recently Galveston, Texas, the Norwegian Prima made its debut at the company’s cruise terminal at PortMiami today.

“I’ve had the pleasure of seeing her come to life at the Fincantieri shipyard in Venice, Italy as well as launching her in style in Iceland. Now, we are showcasing her to our community here in Miami. It’s a dream come true,” he added.

The Norwegian Prima is the first in Norwegian’s Prima Class, which will see the debut of five additional vessels through 2027.

According to the company, the 3,100-guest ship was built to elevate the guest experience with upgraded designs and offerings.

Among Prima’s features is the three-deck Prima Speedway, the world’s largest go-kart racetrack at sea, in addition to Indulge, an upscale food hall featuring indoor/outdoor seating.

Other features include a redefined The Haven by Norwegian, the company’s keycard only access ship-within-a-ship concept, as well as The Concourse, which boasts a multi-million-dollar outdoor sculpture garden.