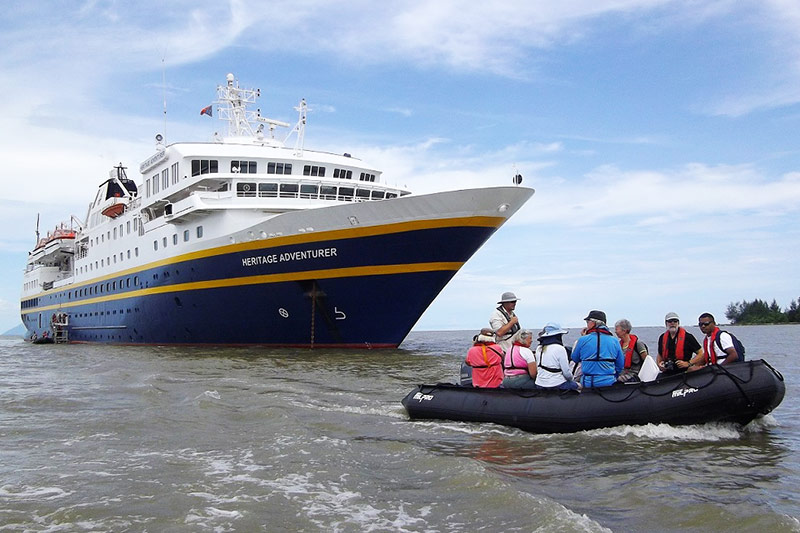 The Heritage Adventurer is now in service for Heritage Expeditions.

After being acquired by the company in 2021, the former MS Hanseatic kicked off its inaugural season in October.

For its maiden voyage, the Adventurer offered a 15-day trip to Indonesia and Papua New Guinea that departed Bali on Oct. 11.

The itinerary included visits to unexplored islands, in addition to remote villages and nature reserves, including Raja Ampat, the Komodo National Park and Liki Island.

During the expedition, the Heritage Adventurer also became the first expedition ship ever to visit the remote village of Pasir Putih, on Indonesia’s Buru Island.

According to Heritage Expeditions, cruise history was made as the passengers were welcomed ashore by around 1,000 locals. Coming from six surrounding villages, the greeters included school children, local dignitaries and more.

Continuing its inaugural season, the Adventurer is set to sail  through the South Pacific to New Zealand, the Subantarctic Islands and down into the Ross Sea, in Antarctica.

Designed for expeditions to remote and polar areas, the Heritage Adventurer was built at Finland’s Rauma shipyard in 1991.

Among its many features is a fleet of 14 Zodiacs, two mud rooms and a presentation theater, in addition to a swimming pool, a jacuzzi, two restaurants, two lounges, a wellness center, a hospital and a shop.

Boasting a 1A Super ice class and a history of polar exploration, the vessel underwent a refurbishment in Europe before debuting for Heritage.

According to Heritage, the reduction will allow for a spacious and comfortable onboard experience as well as an exceptional and personalized expedition experience.