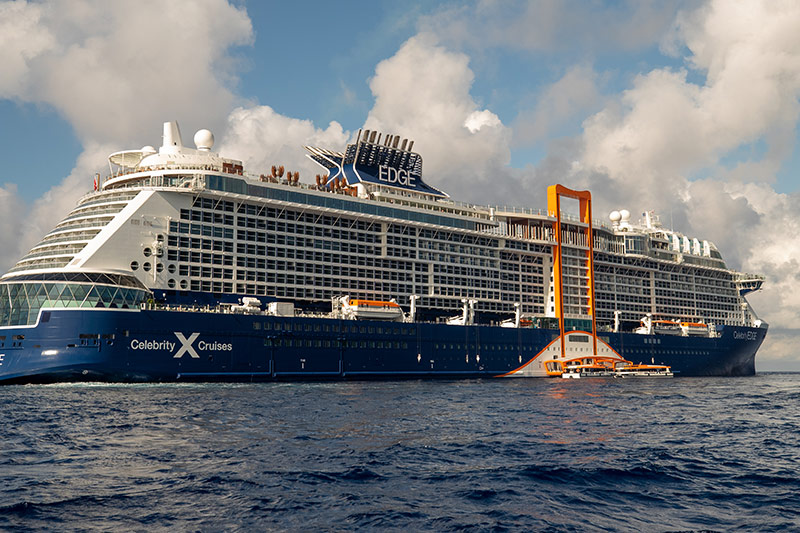 With 16 vessels in service, the premium company is set to continue its year-round operations in Europe while also offering a summer program in Japan.

The season will also mark the debut of the Celebrity Edge in Alaska and the inaugural European program of the new Celebrity Ascent.

According to the company, its ships are set to offer itineraries visiting nearly 100 destinations as part of a year-round deployment in the region.

For the first time ever, an Edge Series ship will homeport in Southampton, with the Celebrity Apex offering more Norwegian Fjord sailings than ever before, including a new, 12-night Norwegian Fjord and Arctic Circle itinerary.

Additional itinerary options include sailings throughout Scandinavia, along with special sailings to Egypt and Israel.

Homeporting in Yokohama from April 2024 to October 2024, the Celebrity Millennium will sail 12-night itineraries to Japan.

According to Celebrity, the cruises will “immerse guests in the physical and cultural beauty” of the country, with each sailing including overnight stays in Osaka.

Special sailings are also set to take place during the country’s summer festivals culture, including the Golden Week in May.

Following its season in Japan, the Celebrity Millennium will join the Celebrity Solstice providing itineraries in Southeast Asia.

The 11- to 14-night sailings visit 32 destinations across Vietnam, Thailand, Malaysia, Indonesia, Sri Lanka, India and more from September 2024 to April 2025.

In 2025, the Celebrity Edge will become the first Edge Class ship to sail to Alaska. Roundtrip from Seattle, the vessel will take guests on seven-night itineraries to the Endicott Arm Fjord and Dawes Glacier, with stops in Victoria, British Columbia, and Ketchikan.

The vessel will be joined by the Celebrity Summit and the Celebrity Solstice, which, together, they will offer 57 sailings and an array of six- to eight-night itineraries from May to September 2024.

For the 2024-25 season, eight Celebrity ships, including three Edge Series ships – the Celebrity Ascent, the Celebrity Beyond, and the Celebrity Apex – will offer itineraries ranging from three-night weekend getaways to longer 12-night voyages.

The Celebrity Ascent is set to offer a rotating schedule of seven-night Western and Eastern Caribbean itineraries, visiting the ports of St. Thomas and St. Maarten, or Georgetown, Grand Cayman and Labadee, Haiti.

The Celebrity Beyond will sail ten- and 11-night itineraries to the Southern Caribbean, visiting St. George, Grenada, St. John’s Antigua, St. Maarten, and more. The vessel will also take guests to see the Panama Canal, in Central America.

According to Celebrity, the 2020-built vessel will visit some of the “most sought-after destinations” in the region, including Puerto Plata, Dominican Republic; Labadee, Haiti; Key West, Bimini, Bahamas; St. Kitts, Tortola, and more.

Other Destinations Around the World

In Australia, the Celebrity Edge is set to return for a second season Down Under. Starting in October 2024, the original Edge Class ship will embark on a selection of three- to 14-night itineraries that runs through April 2025.

The line’s three smallest ships are set to continue sailing year-round itineraries to the Galapagos.

The Celebrity Flora, the Celebrity Xpedition and the Celebrity Xploration offer six or seven-night itineraries that, according to Celebrity, are “carefully curated to ensure wanderlust travelers experience all this extraordinary archipelago offers.”

Every sailing includes an option to extend the experience on land.

The Celebrity Eclipse, meanwhile, will make its Northeast debut, sailing to Canada and New England; Greenland and Iceland; and offering seven-night Bermuda itineraries from the New York area.