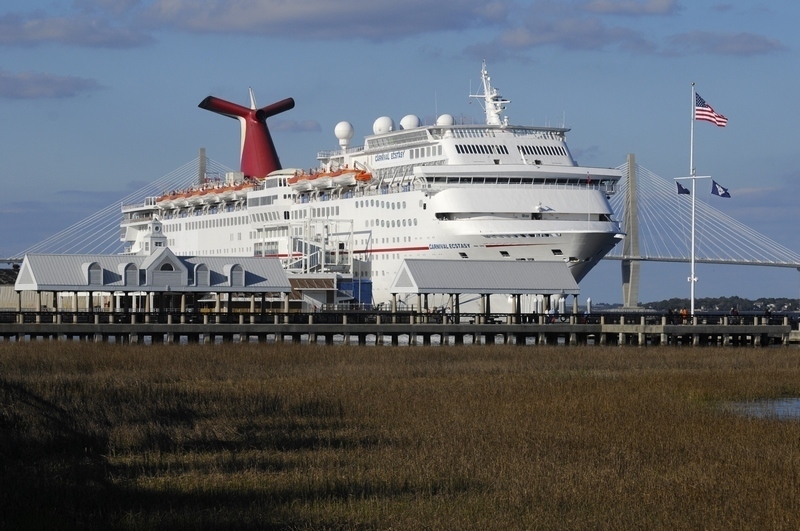 As the Carnival Ecstasy sails to the scrapyard, Cruise Industry News looks at the history of this popular Fantasy-Class vessel.

1990: Carnival Cruise Line welcomes a new class to its fleet with the Fantasy. First in a series of eight-ships – that includes the Ecstasy – the 2,040-guest vessel was built by the Kvaerner Masa-Yards in Finland, at a cost of $300 million.

1991: Following the Fantasy, the Ecstasy is delivered to Carnival in April. After crossing the Atlantic, the vessel is christened by the TV hostess and Carnival’s spokesperson Kathie Lee Gifford during a ceremony in New York City.

1991: The ship departs on its maiden voyage in June, kicking off a series of short cruises to the Caribbean and the Bahamas departing from Miami. As Cruise Industry News reported at the time, the 70,367-ton vessel set and broke passenger load records several times, leading Carnival to order additional Fantasy-Class vessels.

1998: While leaving the Port of Miami in July, the Ecstasy suffers a high-profile fire that leaves it out of service for two months. Following the incident, a total of 48 crew members were treated for smoke inhalation and did not require hospitalization and an additional 14 were hospitalized. Eight passengers required medical assistance, with two admitted to the hospital.

1998: Following repairs at the Newport News shipyard in Virginia, the Ecstasy resumes service in September. Approximately 50 of the 150 damaged cabins were still pending repairs when the vessel welcomed passengers back for a three-night cruise to the Bahamas.

2000: The Ecstasy debuts on the West Coast. Replacing the 1985-built Holiday, the vessel is deployed on a program of three- and four-night cruises to Baja California departing from the Port of Los Angeles.

2000: The ship is reflagged, with its registry port changing from Monrovia, Liberia, to Panama City, Panama.

2003: With Carnival Corporation investing $40 million in a new cruise facility in the Los Angeles area, the Ecstasy becomes one of the very first cruise ships to be based in the Long Beach Cruise Terminal.

2004: As the Holiday launches Mobile as a new homeport for Carnival Cruise Line, the Ecstasy debuts in the Port of Galveston. Returning to the Caribbean region, the vessel replaces its smaller fleet mate in the Texas homeport, offering a year-round schedule of four- and five-night cruises to Mexico.

2005: The Ecstasy is chartered to FEMA as part of Hurricane Katrina relief efforts. Along with the Sensation and the Holiday, the ship spends six months docked in the Gulf region while housing people affected by the natural disaster.

2006: After completing the long-term charter to the U.S. government, the Ecstasy returns to service in April. Before resuming its regular schedule, however, the vessel is subjected to its first significant refit, receiving a new minigolf course, new conference rooms and art galleries, an extended children play areas and completely refurbished cabins and suites.

2007: In line with other Fantasy-Class vessels, the Ecstasy sees the addition of the Carnival prefix to its name in November.

2009: In another multi-million-dollar renovation, the vessel receives new features that include an expansive water park with a 300-foot-long water slide, a tropical-style main pool area, and an adults-only retreat located aft. Additionally, 98 balconies are added to existing staterooms.

2010: Sixty passengers suffer minor injuries after the Carnival Ecstasy makes a hard turn to avoid an adrift buoy. The maneuver resulted in the ship listing 12 degrees to the starboard side, Carnival said at the time.

2010: Carnival announces plans to send the Ecstasy to New Orleans. Along with the Carnival Conquest, the vessel is expected to launch a year-round program of four- and five-night cruises to the Western Caribbean starting in September 2011.

2011: Instead of New Orleans, the Ecstasy repositions to Port Canaveral. Starting in November, the vessel offers four- and five-night cruises to the Bahamas and the Caribbean from the Central Florida homeport.

2014: With the Carnival Imagination being redeployed to the West Coast, the Ecstasy returns to Miami, picking up a program of short cruises to the Bahamas and the Caribbean from its sister ship. The three- and four-night cruises include visits to Nassau, Cozumel, Key West and more.

2016: As part of another homeport rearrangement, the Carnival Ecstasy debuts in Charleston. Replacing the Carnival Fascination, the ship offers year-round four- to seven-night itineraries to popular destinations in the Caribbean and the Bahamas.

2017: In January, the Ecstasy spends two weeks in a drydock as part of a multi-million-dollar renovation that added a variety of new dining and beverage innovations such as Guy’s Burger Joint, BlueIguana Cantina, Alchemy Bar and Cherry on Top.

2019: With the larger Carnival Sunshine replacing it in Charleston, the Ecstasy debuts in Jacksonville for four- and five-night cruises to the Bahamas.

2019: In October, the vessel completes what turned out to be its last drydock. Marking the reopening of the Grand Bahama shipyard after the Hurricane Dorian, the refit included the addition of a Bonsai Sushi Express eatery, a new video arcade and more.

2020: With the pandemic leading the cruise industry to a full stop, the Ecstasy completes a last Bahamas cruise before entering an unprecedent operational pause in mid-March.

2021: In November, Carnival confirms plans to reactive the Ecstasy. Resuming its regular schedule of short cruises departing from Jacksonville, the ship is set to welcome guests back in March 2022.

2022: Just months later, in a turn of events, Carnival announces plans to retire the Ecstasy. Replacing its sister ship Sensation, which is also being retired, the vessel is set to offer a farewell season of cruises departing from Mobile before leaving the fleet in October.

2022: The Ecstasy finally resumes service in March, kicking off a series of cruises from new Alabama homeport. In June, an antique Rolls Royce that was part of the ship’s décor is removed as preparation for its retirement.

2022: After completing its final cruise on October 15, the Ecstasy sails to Miami before embarking on its last voyage to the scrapyard. Sold to Turkish ship breakers, the vessel is set to arrive in Aliaga – where it will be recycled – in early November.