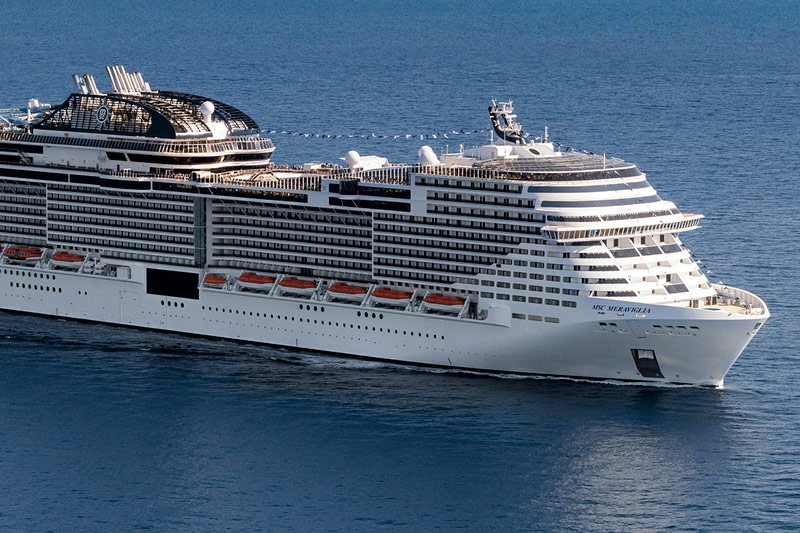 The 2017-built ship is now offering a series of cruises to the Bahamas and the Caribbean departing from the Central Florida homeport.

Ranging from two to seven nights, the ship’s itineraries feature visits to popular destinations in the region, including Cozumel, Costa Maya and Belize City.

Most of the cruises also include a stop in Ocean Cay MSC Marine Reserve, the company’s private island in the Bahamas.

Ahead of MSC’s first complete season in the Northeast, the MSC Meraviglia concludes its winter program with a repositioning cruise to New York City.

The 11-night voyage departs Port Canaveral on April 9, 2023 and includes calls in five ports in the Eastern and Southern Caribbean.

Upon arriving at its new homeport, the 167,600-ton vessel kicks off a year-round operation in the region.

Sailing from Manhattan Cruise Terminal, the program features itineraries are six- to 11-night voyages visiting the Caribbean and the Bahamas, as well as Bermuda and Canada & New England.

Boasting 19 decks and capacity for over 4,500 guests in double occupancy, the MSC Meraviglia was built in France by the Chantiers de l’Atlantique shipyards.

Lead of the five-ship Meraviglia Class, the vessel offers several unique features, including the Galleria Meraviglia, a 96-meter-long central promenade equipped with an 80-meter LED dome and an expansive shopping area.

Other features include a complete waterpark and 12 international dining venues, as well as 20 different bars and lounges.

After entering service in Europe in 2017, the MSC Meraviglia originally debuted in North America two years later. At the time, the vessel arrived in Miami as MSC’s largest U.S.-based ship.