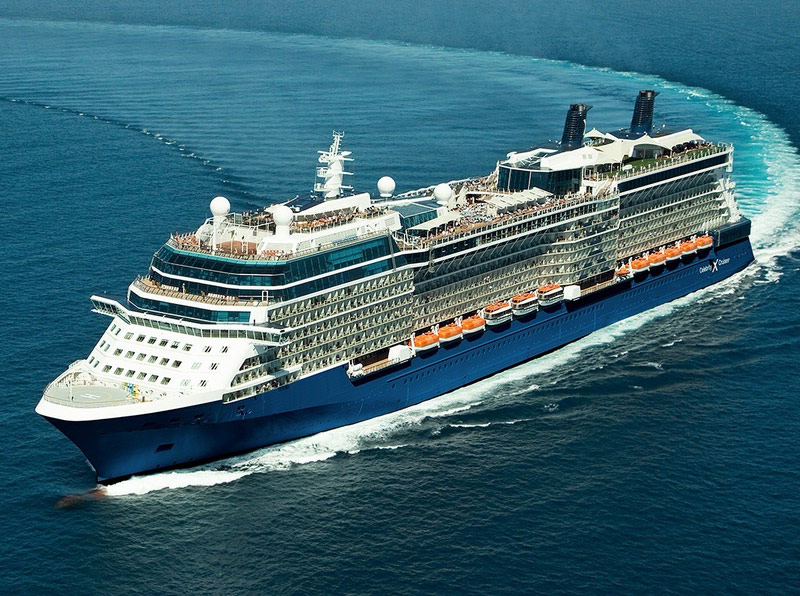 After spending over ten days at the Chantier Naval de Marseille, the 2012-vessel is now sporting a blue-colored hull that was first introduced by the Celebrity Edge in 2018.

Part of the company’s new livery, the look is now present on ten of the 12 Celebrity Cruises large cruise ships.

During its recent shipyard visit, the Reflection also underwent maintenance and technical upkeep, in addition to regulatory and class work.

Set to cross the Atlantic for a winter season in the Caribbean, the Solstice-Class ship recently completed its tenth year in service.

First introduced in 2012, the 126,000-ton vessel is slightly larger than its four sister ships and features an extra deck with additional public areas and cabins.

Among its facilities is a glass-enclosed pool deck, a selection of ten dining venues – including five specialty restaurants – and a three-deck main theater.

The Reflection also features Celebrity’s unique Lawn Club, an outside deck with a half-acre real grass lawn, as well as the exclusive Reflection Suite.

The two-bedroom accommodation offers a total of 150 square meter of space, in addition to a distinctive, all-glass shower extending out over the edge of the 3,030-passenger ship.

With its new blue hull, the Reflection is set to offer week-long cruises to the Caribbean during Celebrity’s 2022-2023 winter season.

Departing from Fort Lauderdale on every Sunday, the vessel will sail an alternating schedule of Western and Eastern Caribbean voyages.

For the 2023 summer, the Reflection is slated to return to Europe for a series of seven- to ten-night cruises to the Mediterranean.