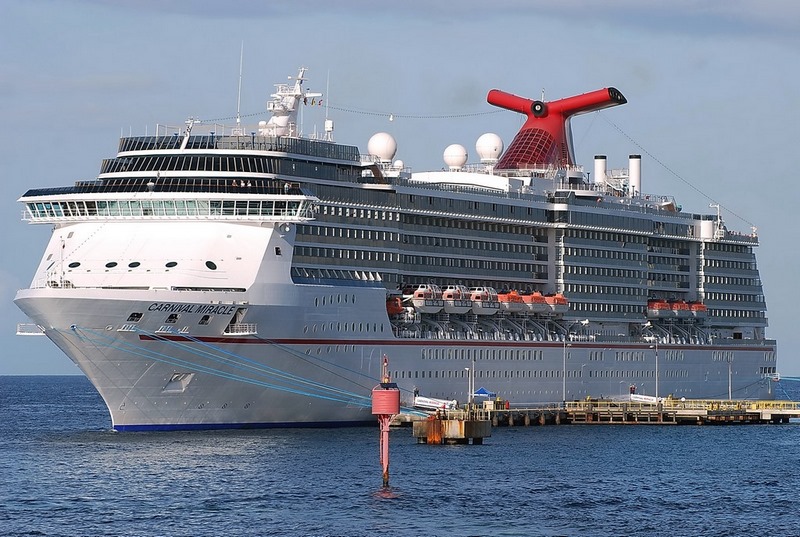 The Carnival Miracle is currently undergoing a routine drydock in Astoria, Portland. Part of the ship’s regular maintenance schedule, the shipyard stay was confirmed by Carnival Cruise Line in May.

In addition to regular upkeeping and class work, the Spirit-Class vessel is set to receive Carnival’s new blue, red and white livery.

Created to celebrate the company’s 50th anniversary, the new hull look was inspired by officers’ uniforms and features a navy-blue bow along with red and white accents running the entire length of the ship.

After completing the drydock, the Miracle is set to resume its cruise program in the West Coast on November 17.

On the date, the 88,500-ton vessel sails from Long Beach on a short cruise to the Mexican Riviera. The five-night itinerary includes full-day visits to Cabo San Lucas and Ensenada before returning to Carnival’s cruise terminal in the Los Angeles area.

During the 2022-2023 winter season, the 2,124-passenger ship is also set to offer two-week cruises to Hawaii, as well as additional three- to six-night itineraries to the Mexican Riviera and Baja California.

Designed with a multi-deck atrium, a glass-enclosed pool deck and a large number of cabins with private balconies, the ship underwent a major refurbishment in 2015.

At the time, it received all of Carnival’s Fun Ship 2.0 upgrades, including the Alchemy Bar, the RedFrog Rum Bar and the Cherry on Top candy store.

Other features of the vessel include the Punchliner Comedy Club, a Serenity adults-only retreat, a classic American-style steakhouse, a nine-hole miniature golf course, a 14,500-square-foot health and wellness center, and more.

In addition to the Miracle, six Carnival ships have completed scheduled drydocks in 2022, including the Carnival Luminosa – which was transformed in a Carnival vessel at a European shipyard in September.