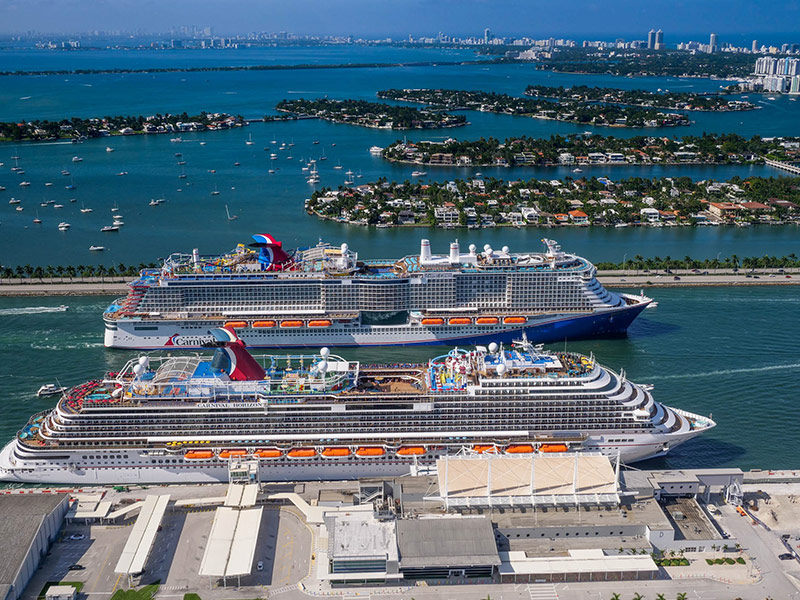 With a goal to achieve a 20 percent carbon intensity reduction by 2030, Carnival Corporation is a third of the way there and efforts are only accelerating for the company’s sustainability agenda, said Chief Maritime Officer Admiral Bill Burke.

“It’s been about quite a few different things, including getting the ships back in service so we can make them better,” said Burke, who has to figure out how to make a fleet of over 90 ships sailing globally as efficient as possible.

That includes a new Service Power Package update kit for the fleet, which is essentially a catalog-style list of potential upgrades each ship may be eligible for. Burke called the project significant.

The upgrade program delivers an average of five to 10 percent fuel savings per ship and is expected to reduce fleetwide greenhouse gas emissions by more than 500,000 metric tons each year, according to company documentation. That means $150 million in annual fuel savings.

“Changing the composition of the fleet helps,” Burke said. “Older ships departing and newer ships coming in, which are more efficient, and LNG ships are just more efficient.

“Some operational things we’ve done includes constant speed. Leave on time, don’t be late, don’t sail too fast. If you are going to be late just be late and let us know so we can plan for it … don’t burn too much carbon to get there.”

Big gains are still to be had in HVAC changes, Burke said, noting that even five-year-old equipment could be replaced and drive payback on energy savings. In addition, a handful of ships were still waiting on LED lighting conversions.

“That is some basic blocking and tackling around energy efficiency,” he told Cruise Industry News.

“It’s the United Nations,” he said, of the brands working together. “They have to work together to make it work. We let them sort it out, but the general principle is to do the thing that is best for the corporation.”

On some itineraries that could mean fewer ports or more overnights, Burke explained.

What may help those Caribbean cruises, however, is the opening of Carnival’s new destination in the Bahamas.

“That could represent a significant fuel savings for us,” Burke explained, as it is close to Miami and would cut down itinerary mileage.

Bio-fuel testing is in progress, with a key eye on testing various blends, and as of August, a large battery installation was underway on an AIDA ship with hopes of a third quarter commissioning.

On the AIDAnova, a fuel cell is nearing an acceptance test.

With the batteries and a fuel cell set to be tested, Burke said he first needs to see that they will work.

“It’s not easy to take something that works on land and make it work in a marine environment,” he noted. “If it goes well we would consider trying them on other ships. If your battery or fuel cell is roughly the same size (in output) as a main engine you can peak shave for long periods of time. If you can truly peak shave for more than an hour or two, you can do it between ports and that buys you real efficiency.”

Carnival Corporation is poised to have 20 percent of its capacity powered by LNG come 2025.

“Every ship will have our Service Power Package, or that will be largely complete. We will have all ships able to operate on a single engine in port year-round in all climate conditions,” he added

“We will continue to improve the efficiency of power generation.”