Here’s What We Know About the New Sun Princess 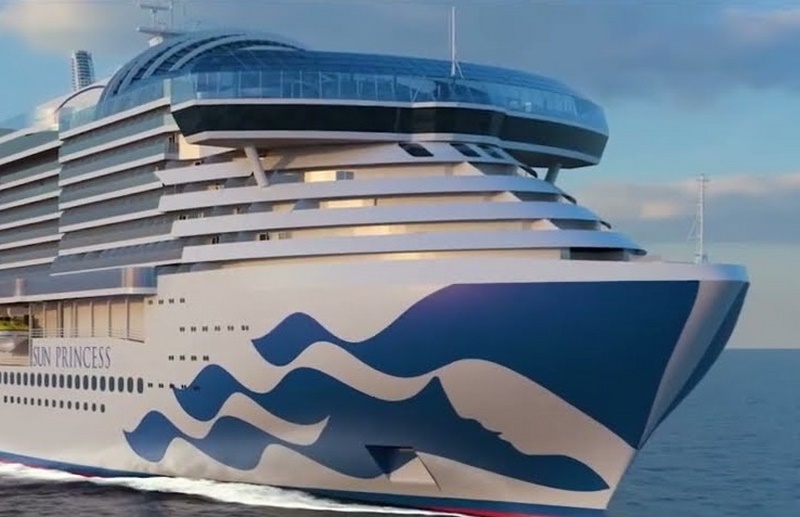 After months of anticipation, Princess Cruises recently revealed the first details of its first Sphere Class newbuild, the Sun Princess, set to debut in early 2024.

Here’s all we already know about the ship and its features: 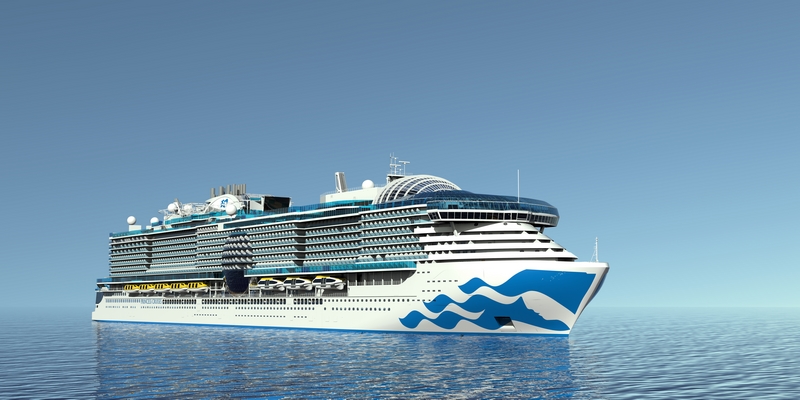 The new Sun Princess will be the third ship to carry the name Sun Princess. First introduced by Princess Cruises in 1974, the name continued to be in use until 1988 before being revived for the first time in the mid-1990s.

Sold in the early days of the COVID-19 pandemic, the second Sun Princess debuted in 1995 as the leader of the four-ship Sun-Class. At the time, it featured the cruise line’s first ever 24-hour cafe and the fleet’s largest number of balcony cabins.

The new Sun Princess will be Princess Cruises’ largest ever cruise ship. Taking over the title currently held by the 145,000-ton Discovery Princess, the 175,000-ton newbuild will accommodate over 4,300 guests and feature larger public areas.

Currently under construction at the Fincantieri Shipyard, the 21-deck vessel will also become the biggest cruise ship ever built in Italy 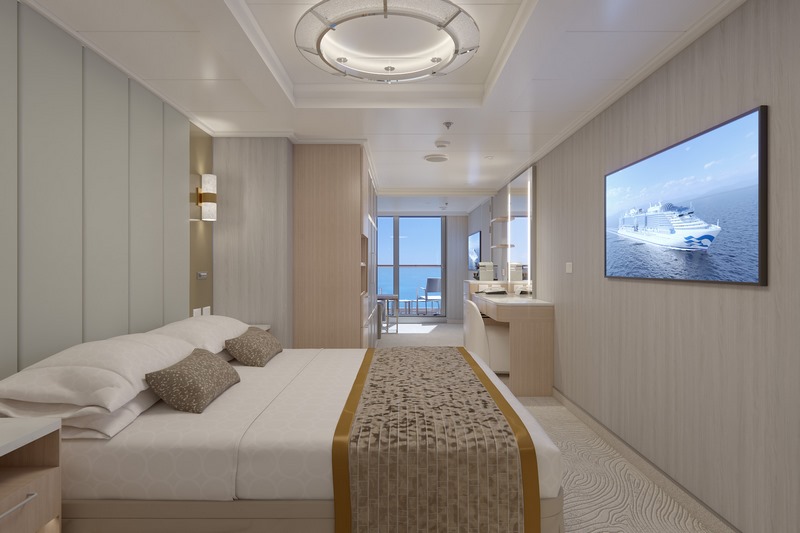 According to Princess, the ship was designed to offer dynamic views of the world, in addition to innovative experiences, from service to food to entertainment. The vessel’s lighter and brighter look will embrace the outside and celebrate the romance of the sea while offering more outward views, the company added.

The Sun Princess will also feature what Princess calls “newly appointed suites and staterooms” that feature more outdoor balcony space. Among the total of 2,157 accommodations, 1,500 feature balconies and in-room sofas, while 50 are suites and 100 are connecting rooms, the company said. 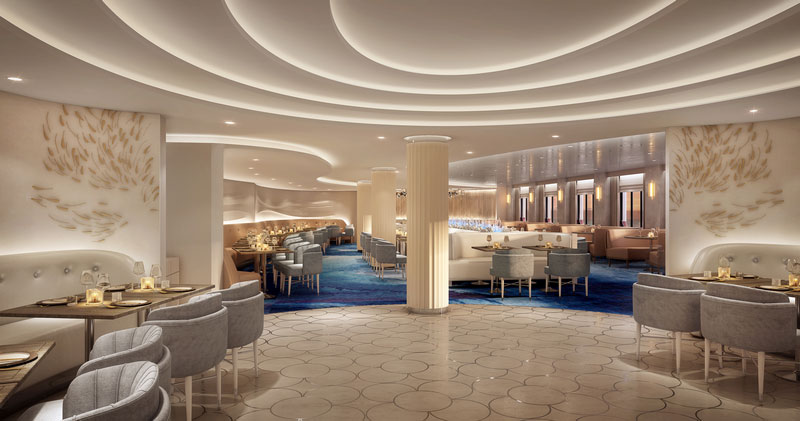 One of the new features of the vessel, is Princess’ first ever suite enclave. Building on the trend of the ship-within-a-ship concept, the company will offer two new accommodation categories: the Signature Collection and the Reserve Collection.

Comprising the vessel’s best suites and mini suites, the first includes access to private areas such as a restaurant, a lounge and a sundeck, while the second comes with its own private restaurant and in-cabin cabanas. 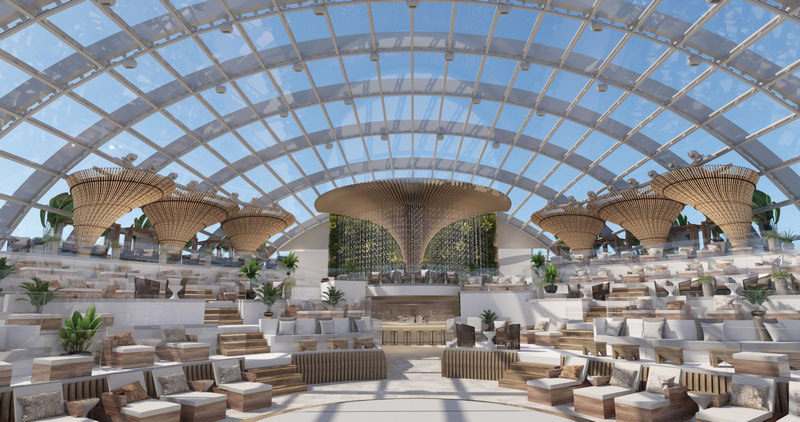 First Ever Geodesic Dome on a Cruise Ship

The Dome is the first-of-its-kind, glass-enclosed geodesic dome ever constructed on a cruise ship. According to Princess, the venue will work as a cutting-edge multi-purpose area that changes functions as the day goes by.

Inspired by the terraces of Greece’s Santorini Island, the multi-deck area features an indoor/outdoor pool, and unique water feature for use during daytime. At night, the pool becomes a stage, and the Dome transforms into an entertainment venue with a South Beach vibe, lighting effects and the ability to deliver aerial performances. 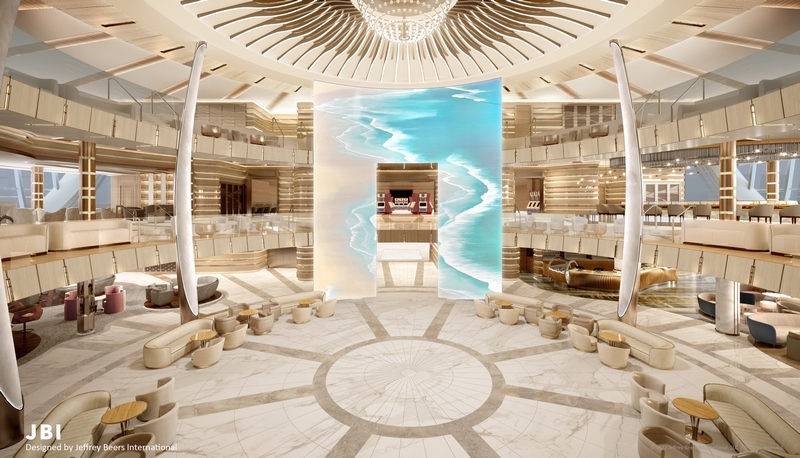 The Piazza, Princess’ signature atrium, will spam three stories, forming what the company calls an “iconic architectural feature” that offers an outward-looking suspended space designed with comfortable seating and areas to enjoy the ocean views.

The center of the venue will also be equipped with a large LED screen which can be moved and configured to deliver live entertainment programming. Adjacent to the Piazza Atrium will be a new coffee shop, Coffee Currents, Bellini’s Cocktail Bar, along with Princess favorites like Crooners Bar and Alfredo’s Pizzeria.

As part of Carnival Corporation’s green cruising initiative, the new vessel will also focus on sustainability.

Equipped with different environment-friendly features and technologies, it will be one of 11 new ships in the corporate fleet powered by Liquified Natural Gas. One of the cleanest fossil fuels currently available in the market, the LNG significantly reduces air emissions, minimizing the vessel’s environmental footprint.

Inaugural Season in the Mediterranean, Followed by Caribbean Debut

The new Sun Princess is set to enter service in early 2024, offering an inaugural spring/summer season of Mediterranean cruises.

Following its European program, the vessel is poised to debut in North America with a series of Western and Eastern Caribbean voyages out of Port Everglades, beginning in the fall of 2024.