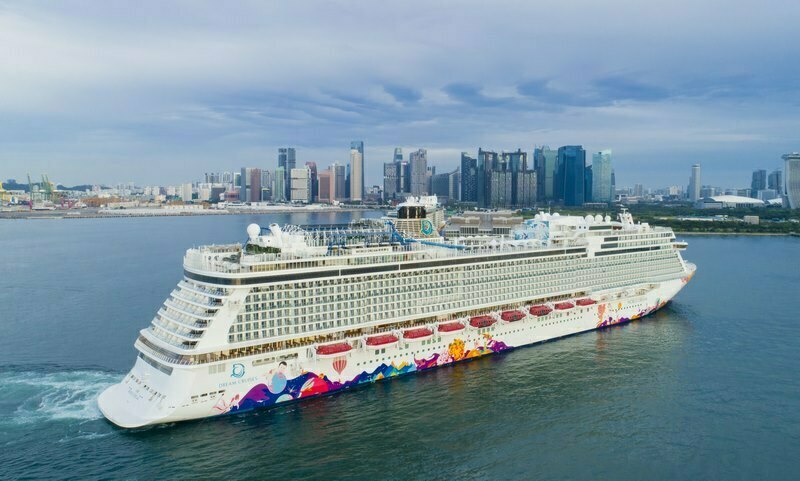 Six months after the collapse of its operators, most of the former fleet of Dream and Star Cruises continue to sit in limbo.

Cruise Industry News looks into the status of every vessel that was operated by the two cruise brands when Genting Cruise Lines filed for wind up earlier this year.

Previously slated for delivery in September 2022, the Global Dream continues to wait for a potential buyer and operator.

Sitting unfinished at the former MV Werften, in Germany, the 5,000-guest vessel was about 75 percent completed when the shipyard filed for bankruptcy and all construction was halted.

Six months after having its operations suspended, the World Dream remains anchored outside the Port of Singapore.

Formerly operated by Dream Cruises, the 2017-built vessel was arrested in March and continues to wait for a decision regarding its future.

The Genting Dream is the only vessel formerly operated by Genting to have resumed service.

Now sailing for Resorts World Cruises, the 2016-ship is offering a series of short cruises in Southeast Asia, with itineraries departing from Singapore and visiting Malaysia and Indonesia.

The Explorer Dream continues to wait for a decision regarding its future while anchored off Port Klang, Malaysia.

Built for Star Cruises in 1999, the vessel originally sailed as the SuperStar Virgo before being renamed and transferred to Dream Cruises in 2019.

After being renamed Arius in August, the former SuperStar Aquarius remains laid-up in Hambantota, Sri Lanka.

Expected to be scrapped along with other former Star Cruises ships, the 1993-built vessel left Southeast Asia in May, arriving at its current location a few weeks later.

Like its sister ship, the former SuperStar Gemini is docked in Sri Lanka for an extended layup.

Now named Gem, the 30-year-old cruise ship left Southeast Asia in May and is also expected to be scrapped in the near future.

The Star Pisces is being scrapped in Alang, India. After hitting the beach in July, the former cruise-ferry is now amid its dismantling process.

Previously operated by Star Cruises, the 1991-built vessel used to offer one-night cruises departing from the port of Hong Kong.

Sold to OM Ships – a German religious organization, The Taipan is currently being converted into a missionary ship and floating bookshop.

Now named Dolos Hope, the 1989-built vessel is expected to launch service for its new operators in 2023.