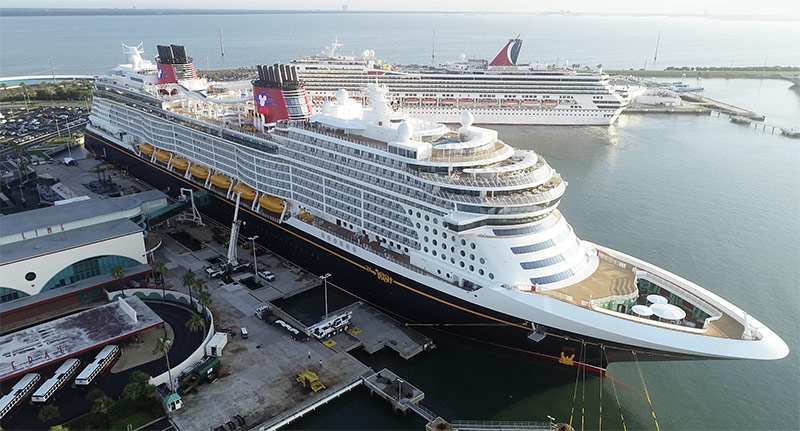 The Disney Wish is officially entering service in Port Canaveral today. After nearly a month of inaugural celebrations, the new Disney Cruise Line vessel is receiving its first paying guests.

For its maiden voyage, the LNG-powered ship is departing on a five-night cruise to Bahamas.

In addition to Nassau, the itinerary features a visit to Castaway Cay, Disney’s private island in the country.

Taking the place of the Disney Dream, which is now sailing from Miami, the 2,550-guest vessel will sail a year-round program of three- and four-night cruises to both Nassau and Castaway Cay.

As the first cruise ship built for Disney in ten years, the Wish arrived in North America on June 20.

First in a series of three newbuilds, the 140,000-ton vessel was constructed at the Meyer Werft shipyard in Papenburg, Germany.

According to Disney Cruise Line, the new vessel is “infused” with more storytelling than ever before and offers several firsts.

Among these, is the first Disney attraction at sea and an immersive tour of the Star Wars galaxy, in addition to family dining adventures themed to Frozen and Marvel.

On the technical side, the Wish is said to be one of the most energy-efficient ships on the water.

With its LNG-powered engines and other technologies, the vessel is estimated to be nearly 30 percent more fuel efficient and emit approximately 20 percent less greenhouse gases.

In 2023, the ship is also expected to be equipped with a one-megawatt fuel cell.

According to Disney, it will be one of the largest such installations in a marine environment and will provide additional emission-free energy for various onboard systems.