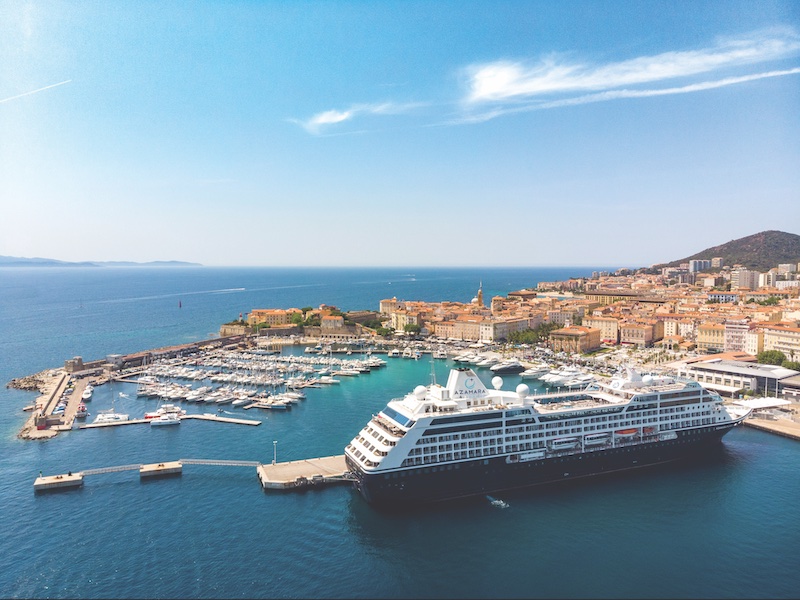 Launching the Azamara Onward in May, Azamara will have its four ships in Europe this summer on a variety of programs in Northern Europe and the Mediterranean.

Among the more unique offerings is an island-focused itinerary.

Azamara is also known for its country-intensive cruises, a concept developed by Pawlus. Entire cruises are focused on ports of call in one country, such as Italy, Spain, Croatia, Greece and Israel in the Mediterranean; Norway, Scotland, Iceland and Ireland in Northern Europe; France in Western Europe; Japan; and South Africa.

“We sail 12 days roundtrip from Cape Town,” Pawlus said, “with ports up and down the coast. And we offer pre- and post-cruise packages and safaris within the itinerary.”

With relatively small ships, Pawlus said he works not only to create unique itineraries but also to do something special, noting an 11-night French intensive itinerary aboard the Pursuit from Amsterdam to Bordeaux, calling at Zeebrugge, Rouen, where the ship stays overnight; Honfleur, Cherbourg, St. Malo and Nantes, also overnight, before sailing up the Garonne River and docking in downtown Bordeaux.

For the winter season, the Journey is going to South Africa and the Pursuit to South America, while the Onward comes to the Caribbean, and the Quest is slated to sail in Australia and New Zealand.

“For the 2023-2024 winter season, we are going to switch around a bit, so the Pursuit is going to South Africa, the Quest to South America, the Journey to Australia and Japan, while the Onward sails a 155-day world cruise from Port Everglades, starting on January 5 and concluding in Barcelona.”

October 8 (2022) is going to be a big day for Azamara with all four ships calling together in Koper, Slovenia.

“It will be our homecoming,” Pawlus said. “Everybody in Koper, the mayor, the authorities, have been very helpful, and it will be Azamara Day in Koper.”

Pawlus said he is continuously looking for events and new ports to be able to offer interesting programs.

“I keep a list of potential new ports on my wall from people who pitch me,” he said. “And sometimes they come off the wall and make it into an itinerary.

“We also do post-mortems on itineraries to better understand what works and what doesn’t. If a port doesn’t rate, I won’t put it back on the itinerary. So basically, I have a report card for every port we call at.

“I am always striving to refine itineraries and make them better. I cannot control the weather, but I can control what ports we go to.”