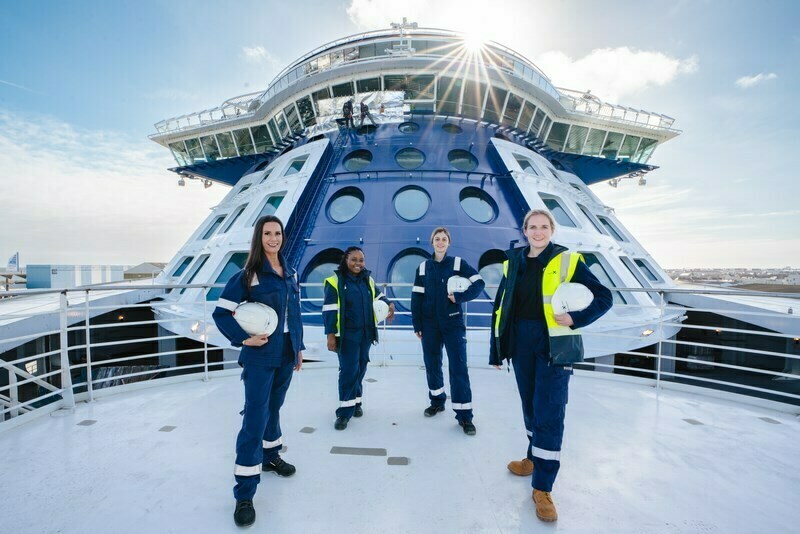 Marking International Women’s Day, Celebrity Cruises announced today that one third of all its bridge officers are now female.

In an industry where less than 2 percent of the mariners are women, the milestone sets a new benchmark, the company said in a press statement.

As a display of its “commitment to equality, advancement and the accomplishments of women,” the brand is also changing its global “X” logo to “XX” in honor of the female chromosome for the commemorative date.

The new logo will be used on Celebrity’s social media channels for 24 hours and also celebrates all those who identify as female, while supporting this year’s #BreakTheBias international theme.

The “XX” logo was projected onto the hull of the Celebrity Beyond as well.  Set to debut in April, the vessel is under final stages of construction at the Chantiers de l’Atlantique shipyard in St. Nazaire, France.

Once completed, the newbuild will be helmed by Kate McCue, who, according to the company, will become the first woman in the industry to serve as a start-up captain.

In 2015, President and CEO Lisa Lutoff-Perlo, appointed Captain Kate McCue as the first – and still only – American female ship captain, starting an intentional effort by the brand to attract more women to the industry and into leadership roles across its fleet.

The cruise line further captured the world’s attention on International Women’s Day 2020, when the first all-female bridge and officer team led by Captain Kate departed on a history-making sailing on board the Celebrity Edge.

Made up of 26 women representing 16 different countries, the all-female bridge and leadership team reunited virtually on International Women’s Day 2021, one year after their achievement, to reflect on the historic sailing and discuss the challenging year that followed amidst the coronavirus pandemic.

Then, in June 2021, Captain Kate led the Celebrity fleet back into operation when Celebrity Edge became the first cruise ship to sail with guests from a U.S. port in more than a year due to the coronavirus pandemic.

“Looking back at how far we’ve come in six years is quite extraordinary, and speaks volumes to the leadership and shared vision of the talented men and women I work with every day,” said Celebrity Cruises president and CEO Lisa Lutoff-Perlo.

“Now, we have incredible women from 19 countries and at all levels of maritime leadership to inspire girls in this awe-inspiring industry that opens up the world with the transformative power of travel. We are so proud to pioneer this path and keep at this work so everyone who dreams of a career on board a cruise ship – whether they identify as male or female – encounters a new standard across the seven seas.”