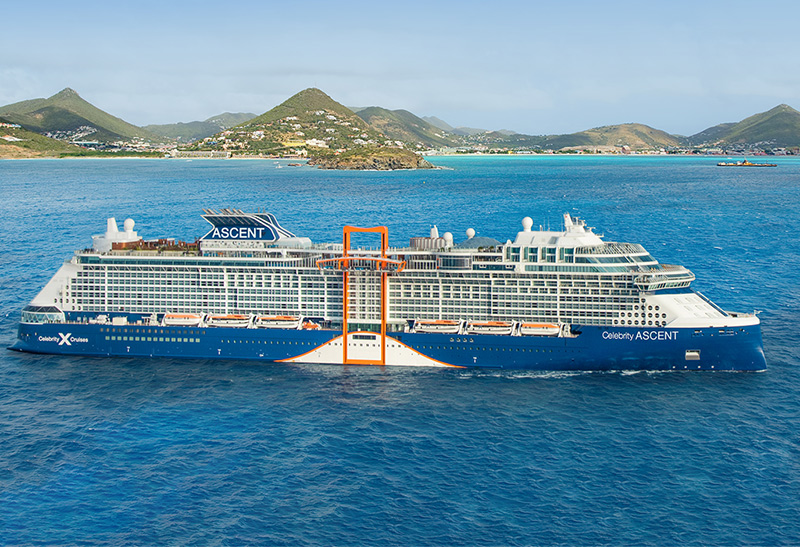 The Ascent will be part of an eight ship line up from the brand, cruising on itineraries ranging from four to 12 nights, according to a press release.

Celebrity Ascent, the fourth ship in the Edge class, which made her way from concept to construction on November 22, 2021, will make her maiden voyage on December 3, 2023.

After departing from Port Everglades, she sail to the Eastern Caribbean for the first time, with calls in Philipsburg, St. Maarten, Charlotte Amalie, St. Thomas, Puerto Plata, Dominican Republic.

Following her maiden voyage, the Celebrity Ascent will make round-trip sailings from Celebrity’s Terminal 25 at Port Everglades every Sunday on seven-night Western and Eastern Caribbean itineraries.

“We’re so excited to debut the spectacular Celebrity Ascent in the serene setting of the Caribbean where she and all of her guests will have their moment in the sun,” said Lisa Lutoff-Perlo, CEO and President of Celebrity Cruises. “She will be joined by her seven sisters all offering different experiences both onboard and ashore. Celebrity is committed to bringing guests more sailing options and Caribbean destinations to choose from, so they can customize their ‘Journey WonderFULL’ and plan the getaway of their dreams.”

The brand will also have the Apex and Beyond in the Caribbean.

The Celebrity Apex will take guests to the Western Caribbean calling in West, Florida; Grand Cayman, and Belize

The Celebrity Beyond is also offering 9, 10 and 11-night voyages to the Southern Caribbean.

Other ships include the Celebrity Silhouette, sailing on itineraries ranging from four to 11 nights, as well as the Constellation, which will be back in Tampa.

The Celebrity Summit will be in Miami for short, four- and five-night Western Caribbean cruises.