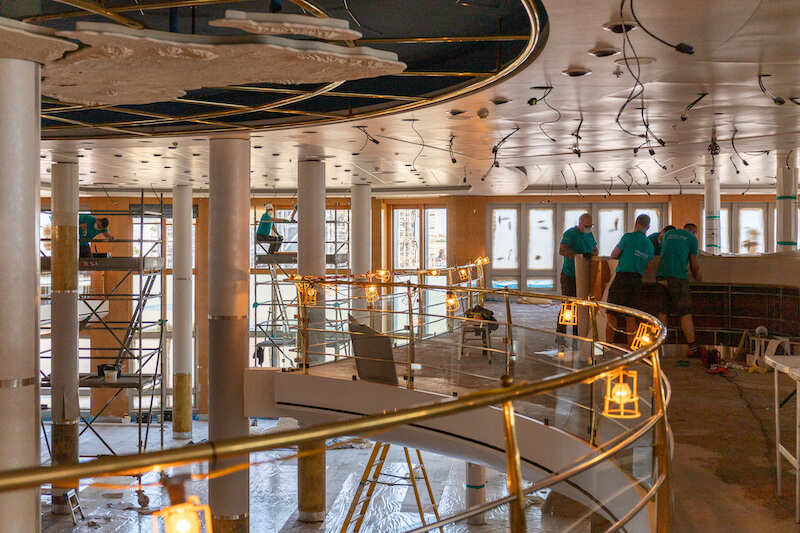 Trimline has announced a new partnership with Marella Cruises where the company acted as “the main outfitter onboard” during the recent refurbishment of the Marella Explorer in Puerto Real, Spain.

The extensive refit took four weeks to complete and included the installation of a lighting system that is 15 percent more efficient than standard LED drivers. Changing the existing lighting over to this system saves 130 Tonnes of Co2 per year, according to Trimline.

Other areas the Trimline team refurbished were Indigo which included the installation of a fully interactive LED dancefloor; The Mediterranean Bar which included the recovering of all loose seats and sofas; Squid & Anchor; The Hideout; Pool Deck; The Attic; Umi Sushi; Cinema; Broadway Show Lounge; Coffee Port; Lounge; Bar 53; The Shack; Destination Services; Cruise Holiday Store; and the carpeting of 60 cabins.

One of the key success factors of the refit, according to Trimline, was the use of its new app called TAPP. The app provides a way for Trimline, its customers, suppliers and contractors, to work collaboratively towards the end-goal of an executed project, on time and on budget.

During the Marella Explorer refit, TAPP helped in the following ways:

• Progress monitoring – having visibility of live progress at all times gave Trimline and Marella a more realistic view of the project stage and progress.
• Planned vs actual resource – as tasks were broken down, it was possible to quickly see where they were with planned vs real-time resource hours.
• Purchase status – having one easy-to-access location for all purchases enabled the project management team to see where everything was in the ordering process and where all materials were.
• People movement – the fully automated checking in and out system gave the team an efficient way to monitor people movement onboard.
• Contractor portal – as all contractors had access to the portal, they were able to read and sign all documentation, including risks assessments, before joining the ship. This saved considerable time when everyone joined the ship and it also made it quick and easy to see where any forms were missing. During their time onboard, contractors were able to quickly access all their required travel and working documentation from the TAPP hub.

“Trimline’s team did a great job during the latest update onboard the Marella Explorer with fantastic project management skills. By using TAPP, I had constant access to live data, allowing me to see exactly where Trimline was against their plan and when an area was ready for sign-off. We had total transparency throughout the project which gave us confidence that we would complete on schedule,” the Marella Cruises Hotel Refurbishment Manager, Matt Easton, said.