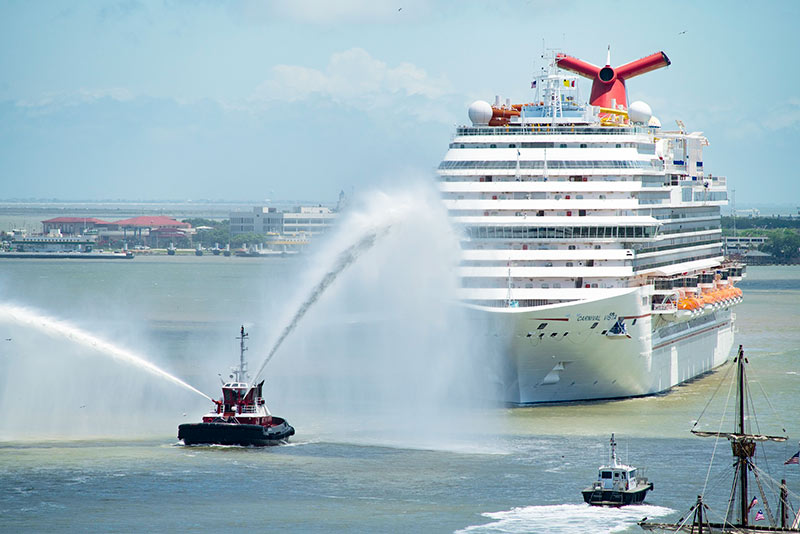 The future looks bright for Galveston, which will receive the Allure of the Seas and the new Norwegian Prima during 2022 and then Carnival’s latest Excel-class ship in 2023, the Carnival Jubilee.

Already, Carnival sails three ships year-round from the Texas port, Royal Caribbean one ship year-round and one seasonally, and Disney one ship seasonally.

The fleet expansion will be facilitated by Royal Caribbean’s new $125 million, 150,000-square-foot terminal set to open in November with the arrival of the Allure. Thus, Royal will move its ships from Terminal 2 to the new terminal, freeing up more space for Carnival, which already has exclusive use of Terminal 1.

Norwegian and Disney will also be using Terminal 2.

“We might have to build another terminal,” Rodger Rees, port director and CEO, told Cruise Industry News. “We have a location in our master plan for a fourth terminal.”

Being among the first ports to relaunch service, Rees said that Galveston was a step ahead of most ports, having put together an emergency response group more than 10 years ago from various city and county agencies and services. That in turn meant that the city and port were ready to meet CDC guidelines.

When Carnival brought in its first ship, the Vista, Rees said people lined the waterfront to cheer and welcome the ship back. The Vista started sailing last July 3.

For its new terminal, Rees said Royal Caribbean has a 20-year lease of the land plus four 10-year extension options. In addition, the port is providing 2,000 parking spaces.

Terminals are big job generators, according to Rees, who noted that the existing terminals each employ between 250 to 300 local workers, including luggage handlers, and that the new terminal is expected to generate some 400 local jobs.

“We can accommodate more cruise ships,” Rees said. “When Royal Caribbean vacates Terminal 2, it will open that for other ships. Disney uses it only seasonally and Carnival has a third ship there every other weekend.

“We have a year’s worth of Fridays open.

“When the Norwegian Prima comes, it will be seasonal to start with as they test the market. Our understanding is that they will start with half a year and if it works out, look to full-time, which will include Saturdays and Sundays, so then we will have to start looking at a new facility.”

Also underway, the port and Royal Caribbean have signed an agreement to do a feasibility study on shore power.

As for LNG bunkering, Rees said: “We are literally in the energy capital of the world, and we have a company that is interested in building a floating LNG bunkering facility on a barge at Pelican Island.”

As the industry is gearing up, Rees said he is projecting net income from cruise for the port in 2022.