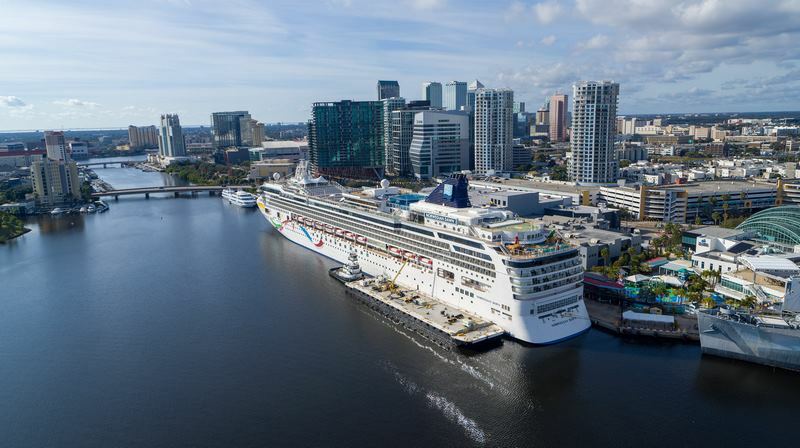 With nine ships now cruising again, half of the Norwegian Cruise Line fleet is back in action.

While more ships are being prepared to restart over the next few weeks, most of the company’s fleet is presently on the move.

Cruise Industry News tracked the location and status of every Norwegian ship as of Dec. 10, 2021:

The new Norwegian Prima is currently being built in Italy. The vessel recently entered the final stages of construction ahead of its 2022 debut.

After wrapping up a season in Alaska, the Norwegian Encore returned to the Caribbean in November. The vessel is now offering Miami-based weeklong Eastern Caribbean itineraries visiting Tortola, St. Thomas, Amber Cove and more.

The Norwegian Bliss resumed service in October, offering cruises on the West Coast. Based in Los Angeles, the ship’s program features seven-night itineraries to the Mexican Riviera, with calls in Cabo San Lucas, Mazatlán and Puerto Vallarta.

Ending a 20-month operational pause, the Norwegian Joy welcomed guests back on Nov. 20. The ship is now offering a series of Western Caribbean cruises departing from Miami.

The Norwegian Escape is currently in the Bahamas, wrapping up a weeklong cruise to the Eastern Caribbean. Based in Port Canaveral, the vessel resumed service in November, offering various itineraries to the Caribbean and the Bahamas.

After a summer program in Europe, the Norwegian Getaway is sailing a repositioning cruise back to the United States. Today visiting Málaga, Spain, the ship started its trans-Atlantic crossing earlier this week and is set to arrive in Miami on Dec. 22.

The Norwegian Breakaway is presently sailing a series of Western Caribbean cruises from the Port of New Orleans. With seven nights, the ship’s December itinerary include calls in Cozumel, Costa Maya, Harvest Caye and Roatán.

After several months in Europe, the Norwegian Epic is ready to launch a winter program in the Southern Caribbean. Starting on Dec. 12, the vessel is sailing weeklong cruises from San Juan, Puerto Rico.

The Norwegian Gem resumed service in August and is now offering cruises from New York City. Presently, the vessel is sailing a five-night Bermuda itinerary that features an overnight call in King’s Wharf.

First ship to resume service for Norwegian back in July, the Norwegian Jade is currently out of service in the Port of Dubai.

Set to resume service in the United States later this month, the Norwegian Pearl is returning to North America. After crossing the Atlantic in September, the vessel visited a drydock in France for routine maintenance and spent the last few months in Europe.

The Norwegian Jewel is currently undergoing regular maintenance and class work in a drydock in Marseille.

Norwegian’s Hawaii-based ship, the Pride of America is currently docked in Portland. The ship arrived on the West Coast in June for maintenance and routine work in a local drydock and is expected to return to operations early next year.

On Dec. 8, the Norwegian Dawn became the latest ship to resume service for Norwegian Cruise Line. Based in Tampa, the vessel is now sailing a series of Caribbean and Bahamas itineraries that includes visits to popular ports in the region such as Cozumel, Curaçao and Grand Cayman.

Set to resume service in 2022, the Norwegian Star is currently spending the operational pause docked in Naples, Italy.

The Norwegian Sun is presently anchored off the Port of Balboa, Panama.

Awaiting the service resumption in Europe, the Norwegian Spirit is docked in the French port of Marseille.

Spending the operational pause in the Caribbean, the Norwegian Sky is docked in San Juan, Puerto Rico.