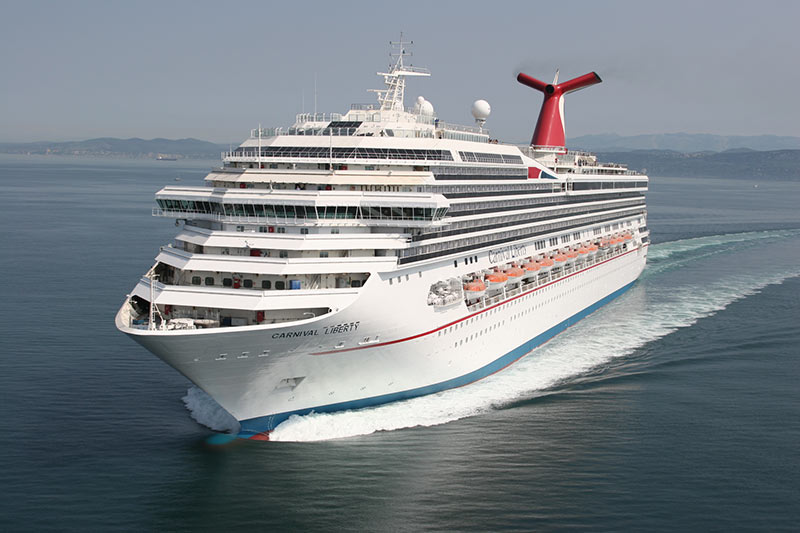 Carnival Cruise Line will close out 2021 with a total of 18 cruise ships back in revenue operation.

In December, while one ship is being taking out of service for emergency repairs, four vessels are welcoming guests back.

The former Carnival Victory is finally resuming service this month. After a long wait, the vessel is kicking off a program of short cruises in Southern California on Dec. 13.

Now named the Carnival Radiance, the ship spent nearly two years in at Navantia for a $200 million bow-to-stern makeover. Originally planned to last six weeks, the refit started in March 2020 but, due to pandemic related delays, could only be completed in October 2021.

The 2,984-passenger vessel now features all of Carnival’s Fun Ship 2.0 dining, beverage and entertainment spaces, in addition to new and rebuilt public areas and cabins.

Another highlight of the work was the addition of the second seagoing Big Chicken, a restaurant created by Carnival’s Chief Fun Officer Shaquille O’Neal that debuted on the Mardi Gras earlier this year.

For its inaugural season, the Carnival Radiance is offering a year-round schedule of Baja Mexico cruises from the Long Beach Cruise Terminal.

Another ship resuming service for Carnival on Dec. 13, the Carnival Conquest is launching a program of short cruises to the Bahamas and Mexico from Miami. After a 21-month operational pause, the vessel’s first cruise has four nights and includes calls in Bimini and Princess Cays.

The Conquest is also visiting Half Moon Cay, Nassau and Cozumel on three and four-night itineraries.

The 2,974-guest Carnival Conquest originally entered service in 2002, as the lead vessel of the five-ship Conquest series. With interior decor inspired by the French impressionism, the ship was built in Italy and features three pool decks, four restaurants and more.

Carnival Liberty and Carnival Sunshine to Fill In for Horizon

Two additional ships are reentering service in December to replace the Carnival Horizon, which is currently heading to Europe for an unscheduled drydock to fix a propulsion issue. The vessel will be out of service through mid January.

Previously set to resume guest operations in 2022, the Carnival Liberty and the Carnival Sunshine are now picking up the Horizon’s guests and itineraries from Miami.

The Sunshine will then to Charleston for a Jan. 13 restart, while the Liberty will continue to sail Horizon’s Miami-based Caribbean itineraries that are scheduled to depart on Jan. 8 and Jan. 22.

With the addition of the four ships to the active lineup, Carnival will see 18 ships sailing with guests by the end of the year.