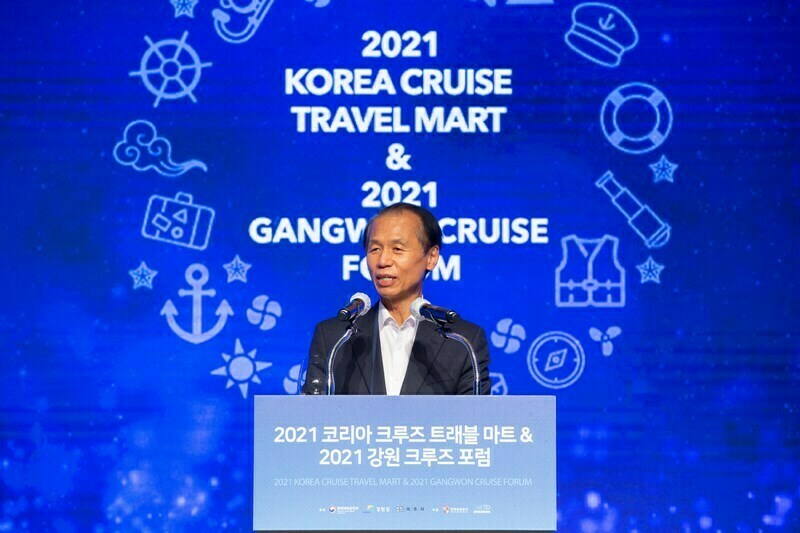 Cruising in South Korea is still a novel opportunity for many, but its locales have as much potential as the Caribbean, said the Governor of the Korean province of Gangwon, Choi Moon-soon.

According to Choi, cruising in the province experienced a revival in the lead up to the 2018 Winter Olympics in Pyeongchang, Gangwon.

“The cruise industry wasn’t well developed before (that) … After we hosted the Pyeongchang Olympics, cruise ships started calling in the ports of Gangwon province,” he said.

According to data shared by Gangwon Tourism Organization, the number of calls made by cruise ships in the Port of Sokcho went from one in 2016 (the Costa Victoria) to 11 in 2017, three in 2018 and five in 2019.

However, Choi said, cruises came to a screeching halt with the start of the COVID-19 pandemic. With 18 cruise calls confirmed for the province for 2021, the number turned to zero overnight.

Now, the province is preparing for the resumption of cruising in 2022-2023.

Choi said that the Gangwon province has a “geographical advantage” for cruise ships.

“(The province) is well connected to Japan, Russia, North Korea and even China. The population living in Northeast Asia, Japan and the region near the East Sea amounts to around 300 million,” he noted.

Gangwon province is also located in the center of the Korean Peninsula, Choi highlighted, “so you can easily reach Vladivostok, Japan, Shanghai and Taiwan.” Its proximity to Seoul is a helpful, too.

“From Seoul, you can go to Gangwon province in one and a half hours. The population living in the greater Seoul area amounts to around 20 million. So, all these people can come to Gangwon province and easily go to Russia, Japan and other countries,” he explained.

Cruise-related plans for the near future include making the Sokcho port Quantum-class-friendly.

“We are preparing to be equipped with Quantum-class infrastructure within four to five years. When Quantum-class cruise ships enter our port, the industry will boom,” said Choi. “We will see an unprecedented take-off in terms of quality and quantity.”

A more distant (and ideal) future includes cruises from the port of Sokcho that will call in North Korea.

“Gangwon province where Sokcho port is located was the place where the war between Russia and Japan occurred during the First World War. During the Second World War, a war between Japan and the U.S. occurred. During the Korean War in the 1950s, there was a battle between Russia, China and the UN forces,” Choi said. “And even today, the Korean Peninsula is divided, north to south.”

Now, Choi and the province are determined to turn it into a peace region.

“When cruise passengers come to this area, we can achieve peace and prosperity together,” he said.

“Until now, we can go to Vladivostok and Japan from the Port of Sokcho. But when North Korea opens then we are going to make it possible to go to North Korea ports whenever we want. I hope that by doing so cruise industry will contribute to the peace in this region,” said Choi.