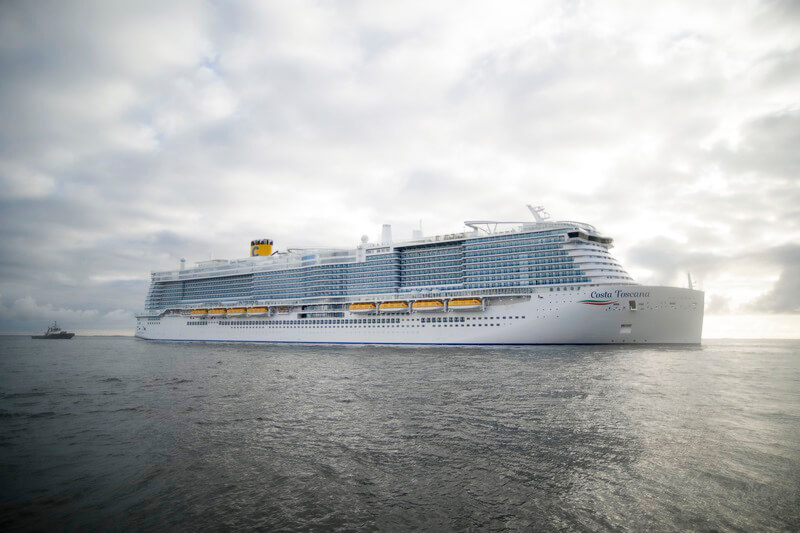 Costa Cruises is upping its game in South America for the 2022-2023 season. With three ships sailing in the region, the company is planning one of its biggest ever local programs.

Currently being built in Finland, the 5,200-guest Costa Toscana will be the highlight of the season, offering domestic cruises in Brazil.

Complementing the Brazilian program with itineraries to Argentina and Uruguay, the Costa Favolosa and the Costa Fortuna will also sail in the region from December 2022 to April 2023.

“The 2022-2023 season will be marked by the arrival of three ships, offering approximately 14,000 berths/day, and also by the debut of the Costa Toscana, which reflects Costa’s commitment to keep investing strategically in South America. This will be our biggest South American season in the last ten years,” commented Dario Rustico, Costa’s General Manager for South and Central America.

The deployment follows the arrival of the Costa Smeralda in Brazil for the 2021-2022 season. The 2019-built ship will debut in the country in December, becoming the biggest ship ever to sail in Brazil.

According to a press release, the LNG-powered Costa Toscana is set to arrive in Brazil on December 16, 2022, just six months after its inaugural cruise in Europe.

Through April 2023, the ship will sail 16 seven-night cruises from the ports of Santos and Salvador. There are also two transatlantic crossings to and from Italy.

The Costa Favolosa will also be based in Santos, offering a total of 15 seven-night voyages to Argentina and Uruguay. Featuring calls in Montevideo and Buenos Aires, the itinerary also allows guests to embark in a second Brazilian port: Itajaí.

Completing the local lineup, the Costa Fortuna will be based in Rio de Janeiro, offering eight-nigh itineraries that travel through Brazil, Argentina and Uruguay. Ports of call include Búzios, Ilhabela, Ilha Grande, Montevideo and Buenos Aires.

Offering longer roundtrip cruises from Europe, the Costa Luminosa is set to sail in the region between January and April 2023. The ship will visit eight ports in Brazil, including Macapá, Manaus, Santarém, Belém, Recife, Maceió, Salvador and Rio de Janeiro.

The Costa Deliziosa , will be a visitor during its 2023 world cruise. The South America segment of the trip takes place between March and April and features calls stops in Rio de Janeiro, Buenos Aires, Montevideo, Ushuaia and more.

The new itineraries went on sale on Friday.