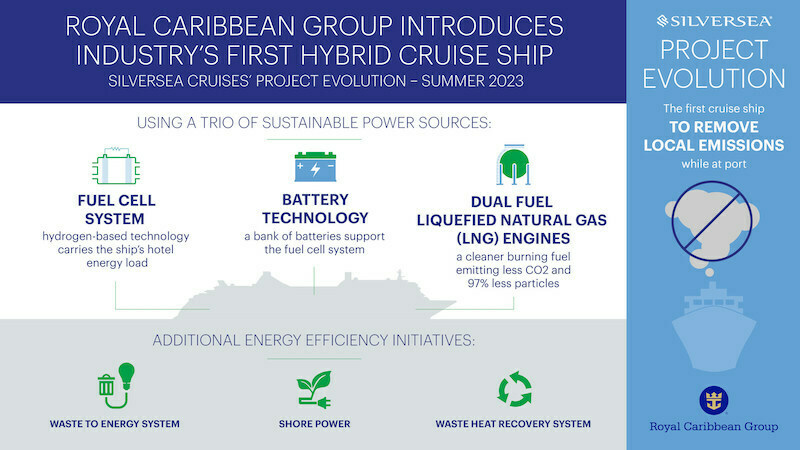 The cruise industry’s first hybrid-powered ship is set to debut in summer 2023 as part of Royal Caribbean Group’s luxury brand Silversea Cruises. The new class of ships, known as Project Evolution, will operate using a trio of power sources including a fuel cell system, battery technology and dual-fuel engines using liquefied natural gas (LNG) as the main fuel. This hybrid solution, using fuel cell technology, allows the ship to be free of local emissions while at port — “another industry first,” according to the group.

“Silversea’s newest ship class is a significant leap forward in our commitment to sustainable ship design and our journey to reduce our environmental footprint,” said Richard Fain, chairman and CEO, Royal Caribbean Group. “We first announced our fuel cell ambitions several years ago. Through dedication and perseverance, we are now proud to introduce the first ship with large-scale fuel cell technology capable of achieving emission-free port operations.”

“Incorporating fuel cells into our ships now is one example of how Royal Caribbean Group is preparing to use new technologies as we move to a non-carbon-based future,” Fain continued. “This pioneering approach builds on our spirit of innovation.”

The new hybrid technology not only helps in port but also allows Project Evolution to achieve a 40-percent overall reduction in its greenhouse gas emissions per double occupancy when compared to the brand’s previous class of ships, according to a press release. The ship class is also projected to achieve an Energy Efficiency Design Index rating approximately 25-percent better than applicable International Maritime Organization (IMO) requirements.

“Being at the forefront of sustainable shipping design and innovation is a testament to our team’s drive for continuous improvement,” said Roberto Martinoli, president and CEO, Silversea Cruises. “These advancements support our desire to showcase the world to our guests and to do so in a mindful and environmentally responsible way.”

Royal Caribbean Group said that it has a “robust portfolio” of technologies enhancing energy efficiency, waste treatment, and water management.

“This steady progress remains rooted in the company’s mantra of continuous improvement. It will drive the group’s future as alternative, non-carbon-based solutions become available to support its overall decarbonization journey,” the company wrote.

Project Evolution’s full suite of initiatives, developed in partnership with Meyer Werft Shipyard, will include both “first-of-its-kind” initiatives and features previously introduced such as:

• Fuel Cell System – this hydrogen-based technology will supplement the main power supply and carry the ship’s total hotel load — up to four megawatts — the first large-scale fuel-cell installation at sea in the cruise industry, according to Royal Caribbean Group;

• Progress to Carbon Neutral Construction – in partnership with Meyer Werft Shipyard, Project Evolution is designed and built taking into consideration the carbon footprint of ship construction and creating a path to overall reduction.