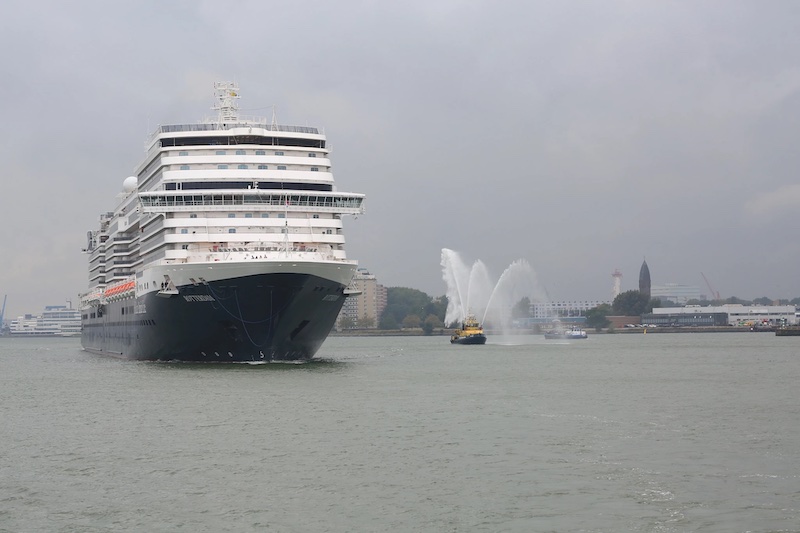 The new Rotterdam is entering service today for the first time after its July delivery by Fincantieri. The 2,650-guest vessel operated by Holland America Line is embarking on a 14-day transatlantic crossing sailing from Amsterdam, the Netherlands.

The maiden voyage will feature visits to five ports – including Ponta Delgada, the biggest city of the Azores, a Portuguese archipelago located in the middle of the Atlantic – before arriving at the itinerary’s final destination of Fort Lauderdale, Florida on Nov. 3.

Guests will also be able to visit two European capitals – Brussels and Paris – as the Rotterdam docks in Zeebrugge, Belgium, and Le Havre, France, respectively, as well as Portland in England and Brest in France.

Once in the United States, the Rotterdam will begin its inaugural Caribbean program, offering a variety of five- to 11-day itineraries that span the southern, western, eastern and tropical regions. All roundtrip from Fort Lauderdale, the cruises take place between November and April, when the Rotterdam returns to Europe to spend the summer in Norway, the Baltic, the British Isles and Iceland.

Set to be named by the Princess Margriet of the Netherlands, the Rotterdam is actually the seventh ship in the Holland America Line fleet to carry the name. The vessel – originally called Ryndam – was renamed in 2020, following the sale of the previous Rotterdam to Fred. Olsen Cruise Lines.

A sister to the 2016-built Koningsdam and 2018-built Nieuw Statendam, the new Rotterdam is part of Holland America’s Pinnacle class. The new flagship, however, offers enhanced amenities and features – including the new Rolling Stone Rock Room, where guests will relive the rock history as a live band performs the iconic hits.

The vessel will also include 11 dining experiences offering anything from burgers and pizza to sushi and seafood. The Grand Dutch Café, for example, is a nod to Holland America Line’s heritage and a place to grab Dutch-themed snacks and beverages. Italian, Asian and French specialty options are also available.

With the Rotterdam entering commercial operations, four Holland America Line ships are now sailing with guests. The latest addition to the active lineup was the Koningsdam, which resumed revenue service on Oct. 10 with a series of West Coast sailings.