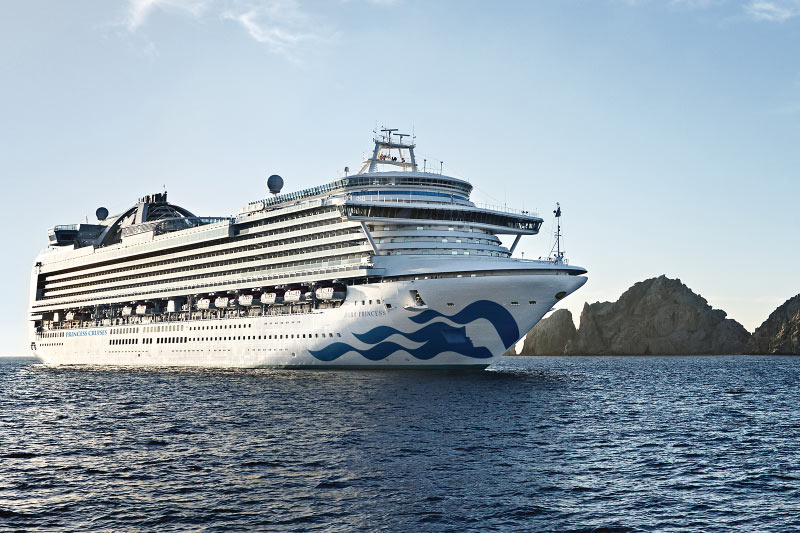 The Ruby Princess is welcoming guests back today in California after a nearly 20-month long operational pause.

As the sixth Princess Cruises vessel to resume revenue operations, the 2008-built ship is also marking the return of homeport operations to San Francisco.

Now sailing a program of five-, seven- and ten-night voyages from the port, the 3,070-guest ship is set to offer itineraries to popular destinations in California and Mexico through the end of the year.

For its first departure, the Ruby Princess is visiting four ports as part of a seven-night “Classic California Coast” cruise.

The itinerary features stops in Los Angeles, Catalina Island and San Diego, where an extended 14-hour call is planned. The ship also visits Ensenada in Mexico before returning to San Francisco.

A sister ship to the 2007-built Emerald Princess and the 2006-built Crown Princess, the Ruby Princess has capacity for 3,070 guests and entered service in 2008.

The vessel brings back popular features of its sisters, including a dramatic piazza-style atrium complete with small-bite eateries and an oasis just for adults called The Sanctuary.

The ship also offers many other innovations that define the Princess experience, including the popular Movies Under the Stars poolside movie screen, multiple entertainment venues, an Asian-style Lotus Spa with fitness center, a wedding chapel and more.

Passengers can also enjoy the company’s array of dining venues, including the signature Crown Grill steak house and the SHARE by Curtis Stone, which debuted onboard the Ruby Princess in 2015, as the celebrity chef’s first restaurant at sea.

With its San Francisco program underway, the Ruby Princess is the third Princess ship to return to the West Coast. The Grand Princess and the Majestic Princess are also sailing in the region, offering departures from Los Angeles since early October.

While its first post-pandemic season in the UK is nearly over, Princess is also returning to the Caribbean soon. Currently finishing a transcanal cruise, the Emerald Princess is ready to launch cruises through the region from Port Everglades on Nov. 6.

By the end of the year, Princess plans to have eight ships in service, including the new Enchanted Princess, which is set to welcome its first guests on Nov. 10, for a season in the Caribbean.