Jaxport Aims for More Homeports in 2021 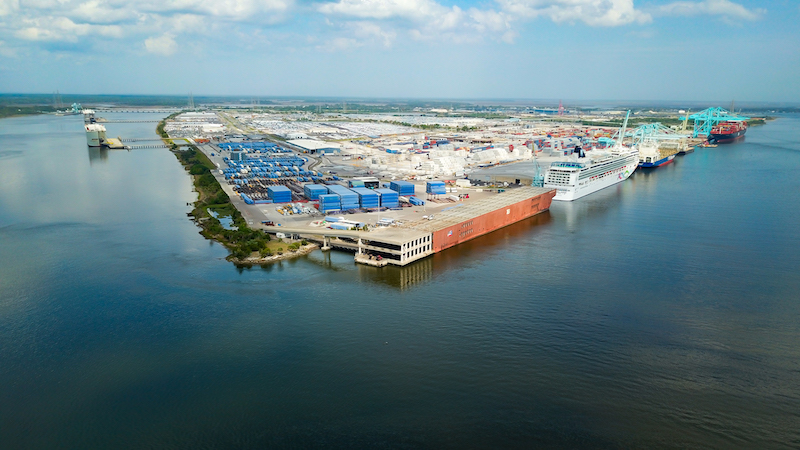 The future is homeports, according to Fred Wong, chief operations officer at Jaxport (Jacksonville Port Authority). At least for the ports that are in the cruise business trying to mend after the blow of the pandemic.

“We are aggressively going out to the market to see if we can get additional homeports,” Wong told Cruise Industry News.

Wong spoke about Jaxport’s plans in the next five to 10 years. But while CDC’s new regulations have to stay in place, the port will be making the most of being in the port of call market.

“We have so much to offer … 22 miles of beaches, world-class golf, deep-sea fishing, historical sites in St. Augustine. So, we are most definitely taking a different approach to not only being a home port of call, which we are fully capable of being, but being a more aggressive port of call as well, being in the intermittent of their service lines,” he said.

“Cruise vessels’ itineraries are forced to have seven days or less, and the CDC has the ability to shorten it even more. There’s no way that these vessels can get down to their predestined itineraries as they used to with their 11- and 14-day runs,” Wong explained.

“They had to repatriate their crew, and of course, at Jacksonville Port Authority, we stepped in and housed about three to four of their Panamax vessels here for a couple of months – the duration for the repatriation of crews,” Wong said.

The pandemic did affect Jaxport, where about eight percent of revenues and volumes are cruise. But doing breakbulk and military operations helped the port survive 2020 and made up for the cruise losses.

“Because of our diversity, we were able to pick some commodities back up that ran pretty strong, such as our breakbulk, which increased throughout 2020. Because, for some reason, during this pandemic, everybody wants toilet paper and paper towels. It was just going off the shelves. And, of course, the disinfecting wipes,” Wong said.

The port’s military operations increased too.

“At Jaxport, we are one of 17 strategic military ports in the U.S. Of course, when military operations ramp up, so do our operations. So, if you ask ‘how did 2020 fare off for Jacksonville?’ as our port authority goes – we did take a hit in cruise because it left the hole, but our other commodities kept us afloat,” he explained.

The port predicts that it will take the whole winter and spring for them to get back on track with cruising.

“We have been waiting very eagerly for the CDC to drop the no sail order, which they did. It’s a little stringent, it’s a little rigorous – but I think the cruise industry in the ports such as us … we’re up to the challenge and up to the test to restart cruise,” Wong said adding that the port’s optimistic about restarting, as it will be done “very strategically and with precision.”

Given the still-existent flight restrictions, Wong did not worry about losing the port’s customer base.

“70 percent of our customer base is a drive-up market. So, there are no planes or airlift that you have to take to get to us. We can reach about 70 million consumers with one day on drive. That makes us very, very attractive,” he explained. “You don’t have to jump on a plane or a train to get here; you could just jump in your family van or vehicle and drive ready to our market.”