How to Scrap a Cruise Ship and What They Go For 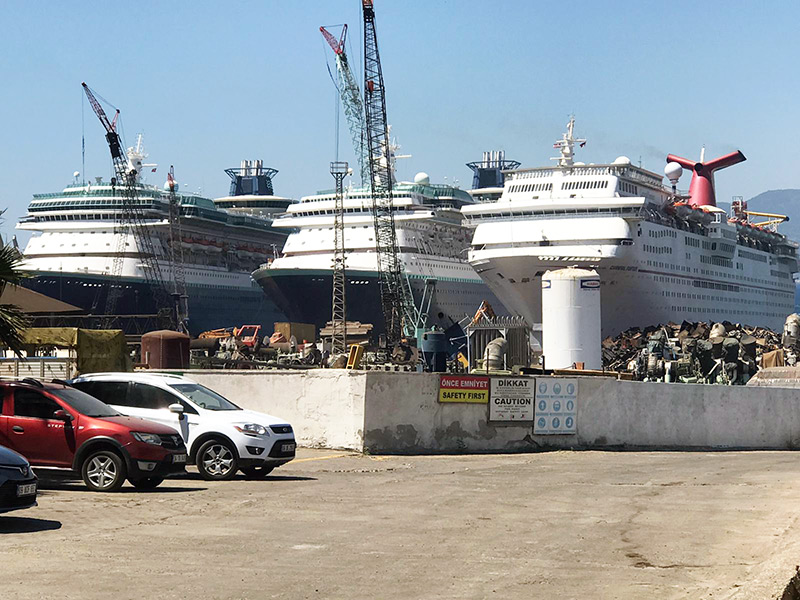 As many as 13 cruise ships were reduced to scrap in 2020 – more than in the five preceding years combined.

The number of cruise vessels removed from the worldwide fleet in 2020 was so high that scrap yards have been struggling to keep up with the demand – especially when the vessels are registered in the European Union and, therefore, have to comply with stricter regulations.

According to Vagelis Chatziginnis, a senior trader at GMS Leadership (one such company that organizes ship scrapping), most of the vessel scrapping in 2020 took place in Turkey.

“We have seen a couple of units being sold for recycling in India already, but a couple of units is nothing compared to the numbers we’ve seen in Turkey so far,” Chatziginnis told Cruise Industry News. “Some of these larger cruise ships (are) being laid up in locations like Greece, for example, until more spaces are available to digest in Turkey.”

Chatziginnis said the average scrap value in India is $400 per ton. In Turkey, the value is considerably less at $280-300 per ton. At the height of the pandemic, however, those values could be as low as $90 for EU-flagged ships.

“When the pandemic was at its peak – let’s say around summer 2020 – and the first cruise ships started being scrapped, some of them were even getting double digits, like hardly $100 per ton, maybe $90,” he said.

The value can depend on various factors, such as the country where the facilities are located or whether the cruise vessel was registered in a EU country.

“If the vessel has to be recycled in compliance with a regulation of the European Union, you would probably be looking in Turkey for something like $200 per ton equivalent because of their very limited capacity of the yards, which are compliant with European regulations,” Chatziginnis explained.

“In the U.S., you have one facility that is approved in the European Union. So, the vessel could be recycled there, but it’s a totally different market. You would probably be looking at something like $80 per ton, for example,” he added.

However, Chatziginnis said that steel prices globally have increased dramatically over the past few months and residual value has increased by nearly $100 per ton in each of the major ship recycling counties.

A role of a company like GMS is to organize the entire recycling process.

“So, ultimately the ownership and responsibility of the vessel would be transferred to the owning entity that would be buying the vessel. The cruise line has nothing to do anymore with the vessel. And thereafter, we are arranging the transportation from point A to point B,” Chatziginnis said.

GMS also vets the requirements of the original owner for regulations that need to be complied with and then guides them with how to proceed with the scraping in the best interests of the cruise industry.

“It sounds like it’s simple, but it isn’t always. Especially when you have to respect other regulations (like the EU ones),” Chatziginnis said.

A record-breaking 46 cruise vessels could enter service in 2021: 30 ships that are set to debut and 16 more ships that were delivered in 2020 but have yet to enter revenue service.

With that many ships entering the scene, cruise lines have to be wary not to oversupply the market, said VesselsValue, a maritime data provider.

“A quick and confident return of demand is paramount for the industry to rebound; otherwise, we should expect to see further delays and removals in an attempt to balance things out,” VesselsValue’s cargo analyst, Guy Cooper, told Cruise Industry News.

The other sad consequence of the pandemic is that many relatively young cruise ships are getting scrapped.

“Look at the Marco Polo – it is a 55-year-old vessel … It has been operating for, like, more than 50 years now… And now, all the other major lines are scrapping all the vessels that were built in the 1990s and the 1980s. This is quite young for the normal industry in cruising in our understanding,” said Chatziginnis.

“I doubt that in the last decade, at least, or maybe even more than this, we have seen so many cruise ships being recycled in a year,” he added.