Carnival Cruise Line has unveiled Grand Central, a three-deck-high space that is one of six themed zones on the new Mardi Gras, set to debut in February.

Carnival presented the space as a unique twist on the traditional atrium, as Grand Central spans Decks 6, 7 and 8 with massive 3,000-square-foot glass panels built into the starboard side of the ship providing guests with impressive views.

According to Glenn Aprile, Carnival’s director of newbuild product development and part of the design team that developed the venue, the idea was to create a space that was as functional as it was eye-catching, while providing guests with that “take your breath away” moment when they first board the vessel.

“Building an atrium into the side of a cruise ship is no easy task and it was a total team effort between our new build management team, engineers, designers, and hotel and entertainment teams to create a space that is as beautiful as it is functional,” Aprile said.

During the day, Grand Central serves as a spot for passengers to enjoy a coffee, drink or light fare, people watch, listen to live music, or partake in trivia contests and other leisurely pursuits.

At night, however, Grand Central transforms into an intimate and immersive venue with a rotation of soon-to-be-revealed experiences created just for Mardi Gras. 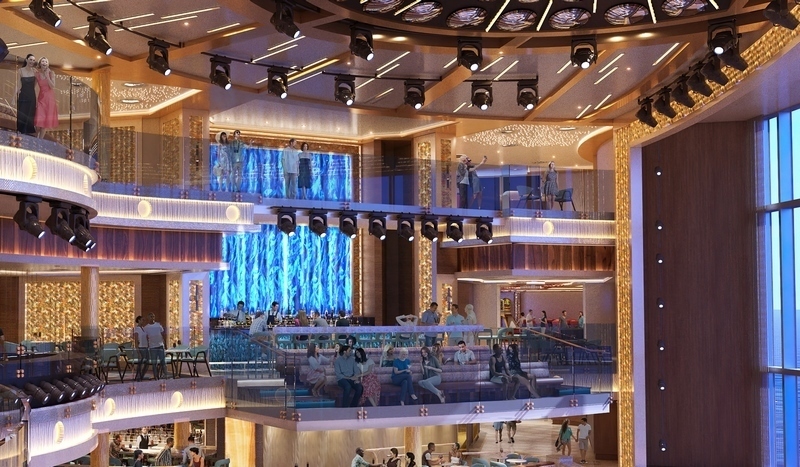 Aprile noted that “with a ship as innovative as Mardi Gras we wanted to create a multi-functional dining and entertainment space that guests can enjoy day and night, while at the same time providing an intuitive way to get around the ship and creating a dramatic centerpiece that is worthy of our most innovative ship. Grand Central provides all that and more. We are extremely pleased with the results thus far.”

Overlooking Grand Central is the multi-level Grand View Bar which like its name implies offers guests a chance to enjoy floor-to-ceiling sea views as they sip custom-cocktails and other libations, amidst awe-inspiring design touches like a virtual waterfall on translucent panels. There’s also the Center Stage Bar on the main level. Both venues will feature specialty cocktails inspired by the theme of that evening’s entertainment.