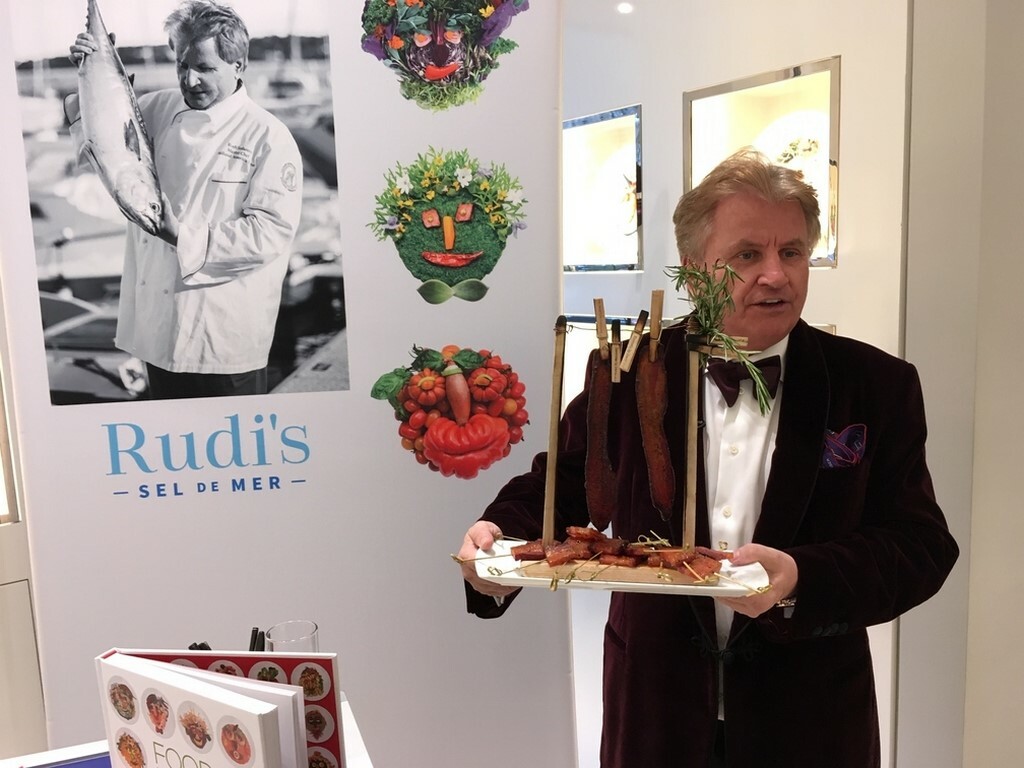 Holland America Line presented some of the food to be found in the new Rudi’s Sel de Mer specialty restaurant aboard the Nieuw Statendeam, along with food faces on plates, at an event in New York last week.

The decorative plates feature ingredients – caviar, squid, fruit, root vegetables, tarragon, chili peppers, and much more – arranged to make Zucchini Zeus, and Smiling Creamed Spinach. Four more plates in the series will be released in early 2019, said Sophie Raubiet, Bernardaud’s director of retail. In January, the cruise line released Food Faces, a coffee table book of the chef’s art. The plates and the book will be available for sale on the Nieuw Statendam. Plans call for passengers to have the plates – individually or as a set – shipped directly to their homes rather than clank in their luggage.

Bite-size lettuce cups of tuna tartar and wallet-thick slabs of salty-sweet bacon were among the dishes served at the event, created by chef David Burk of the line’s Culinary Council.

“It’s the first time we’ve attached a chef to a place and the first time for Rudi to have a place at sea that’s a dedicated place,” Van Der Werff said. “Rudi has been at the forefront of culinary innovation.”

He said the new wine list curated by renowned critic James Suckling will roll out fleet-wide in the two months. It will feature all wines rated 90 or higher, and a “James Rock Star List” featuring wines rated 96 to 100.

Van Der Werff also spilled a little on the yet-to-be released cocktail menu, saying a bottle-service style smoked drink will be served in an oversized glass flask. He showed Cruise Industry News a photo smoke inside a bottle of brown liquid. Smoked Negronis and Manhattans have become increasingly popular in land-based restaurants. This could be following that trend.