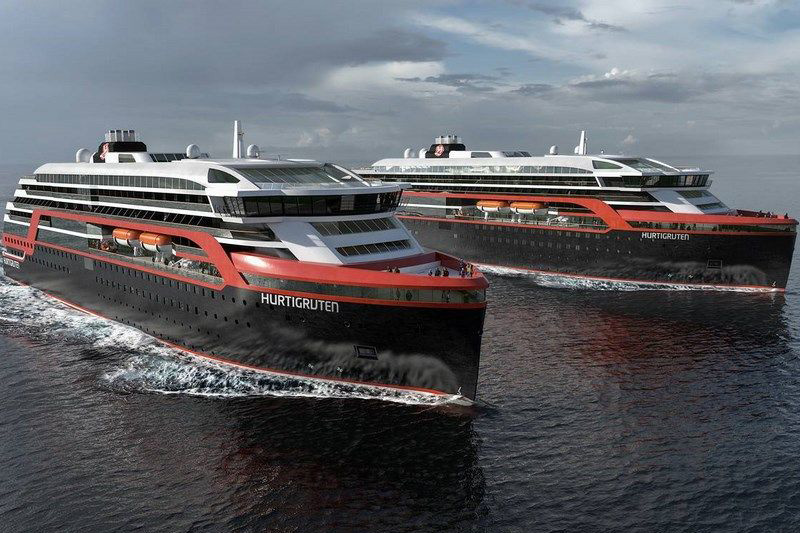 The pair of new 20,000-ton, 600-passenger Hurtigruten ships to be delivered in 2018 and 2019 will be the first cruise ships in the world to utilize hybrid power using a battery system.

“The future of shipping is, without a doubt, silent and emission free,” said CEO of Hurtigruten, Daniel Skjeldam. “We will use our new expeditionary ships as groundbreakers for this new technology and show the world that hybrid propulsion on large ships is possible.”

A prepared statement from the company said the hybrid technology will allow for sailing up to 30 minutes on battery-powered propulsion.

“The technology, in combination with the construction of the hull and effective use of electricity onboard, will reduce the fuel consumption and CO2-emissions from the ships by 20 percent,” said a statement.

The hybrid solution was developed by Rolls Royce. In addition, Bellona, a non-profit organization working to meet and fight climate challenges, has been involved with the project.

“Battery-powered propulsion in ships this size shows that batteries are onboard to stay. This represents a huge reduction in emissions from shipping, and it is only the beginning,” said Fredric Hauge, founder and president, Bellona.

The hybrid ships will be built in two phases. The first ship will be equipped with an auxiliary electric engine, which will reduce the CO2 emissions by 20 percent. The battery-powered auxiliary engine will provide large reductions in fuel consumption.

The second ship will be built with a fully-fledged hybrid engine that can power the entire ship for longer periods of time and distances, according to the cruise line, assuming the technology is ready. The second ship will be delivered in 2019, featuring large batteries and the possibility of extended electric sailing.

“To be able to sail using only electrical power is not only a great benefit for the environment, but it will also enhance the impact of experiencing nature for the guests,” added Skjeldam. “Picture sailing into a fjord silently without any form of emissions.”

The investment in new technology will have a total cost of 124 million NOK. Enova, a Norwegian government enterprise responsible for promotion of environmentally friendly production and consumption of energy, is contributing 45.1 million NOK.