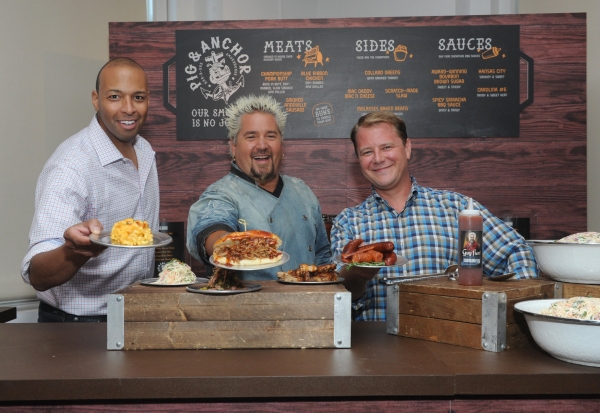 The open-air, free-of-charge Guy’s Pig & Anchor Smokehouse Bar-B-Que debuted on Carnival Magic earlier this year and will be featured on the new Carnival Vista which arrives in New York in November then launches year-round service from Miami later that month. The venue – which features an actual wood smoker, a rarity on cruise ships – will also be featured on the Carnival Breeze and Carnival Dream next year.

Guy’s Pig & Anchor Smokehouse Bar-B-Que builds upon the chef’s longstanding partnership with Carnival. Guy’s Burger Joints – complimentary poolside venues offering hand-crafted burgers, fresh-cut fries and various toppings – are currently featured on more than half the Carnival fleet serving upwards of 100,000 burgers a week, said to make them the most popular burgers at sea.

(Photo:  Guy Fieri, center, with Eddie Allen (vp of beverage ops) on his left, and  Malcolm Burn, cruise director, on his right.