Efficiently Running the Allure of the Seas 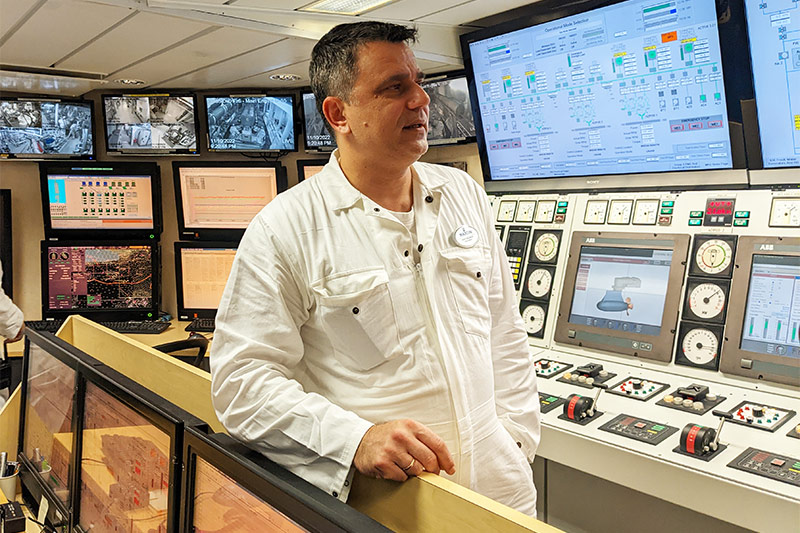 The Allure of the Seas had five engines on and was cruising at just over 21 knots on the way to Cozumel, Mexico, on its inaugural departure from Galveston, Texas, with chief engineer Martin Atanasov keeping an eye on energy consumption and much more.

Atanasov said the majority of the hotel load was being consumed by the air-conditioning alone.

“It is constant. We have so many galleys, ovens and hot plates. Just to cool her down, right now we are running three chillers and they are consuming three megawatts to get the ship to a normal temperature,” he said.

On top of that, the five engines were driving the huge pods, with a sixth engine offline.

“The benefit of pods is you lose less electricity than the conventional propulsion system,” said Atanasov, noting that with all six engines running, the ship had hit just under 24 knots in its last set of sea trials following a quick 2020 drydock in Cadiz.

“We have divers on a regular basis who clean the hull,” Atanasov told Cruise Industry News. “The company is doing trials with new types of hull paint. The less friction on the hull, the more efficient it is and the less energy you need to move from point A to point B.”

Other consumption reductions, he said, could be made in propeller design and regular propeller polishing.

“We polish them quarterly and this increases the efficiency of the ship,” he said.

Elsewhere, water used to cool the engines gets hot and is then repurposed.

“We are using this water to heat up the water you use to shower, for example. That is waste heat recovery,” Atanasov said. “The overall (electricity) problem is consumption. We just have huge consumption. The hotel was fully switched to LED. We are looking at everything, everything that is possible.”

From Bulgaria, Atanasov followed in the family footsteps into maritime engineering, guided by a local academy, his grandfather and father.