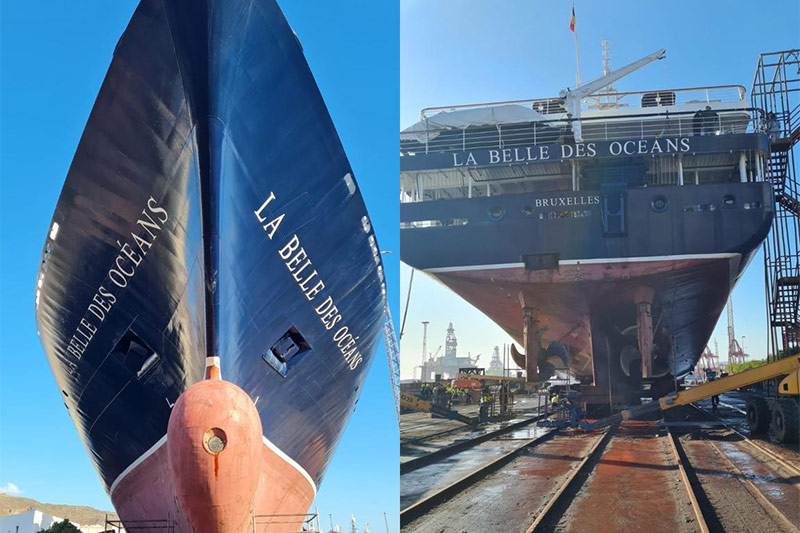 Operating a winter season in the Canaries, the boutique cruise ship is undergoing regular maintenance, in addition to technical overhaul and hotel upkeep.

Following the routine work, the 1989-built ship is set to resume service on January 21, offering a series of cruises in the region.

Set to be repeated through April, the vessel’s regular itinerary sails for seven nights and features calls to six of the Archipelago’s eight main islands.

During the 2023 summer, the vessel is set to reposition to the Mediterranean, offering a series of sailings to Italy, Spain, Greece, Malta and more.

Previously operated by Silversea Expeditions, La Belle des Oceans joined CroisiEurope in 2019. Along with La Belle de l’Adriatique, the 120-guest vessel usually offers upscale cruises in areas that include the Mediterranean, the Atlantic and the Red Sea.

Originally built as an expedition ship, the former Silver Discoverer sailed for a variety of operators during the years, including Clipper Cruise Line and ISP.

Serving as the company’s flagship, La Belle des Oceans is described by CroisiEurope as a human-scale cruise vessel that offers 60 “superb” cabins and suites, all with ocean view.

The 5,218-ship vessel is also equipped with two lounge bars, in addition to a swimming pool, a spa and a fitness center. Other features include expansive sun decks and two restaurants, including a main dining room and an informal grill.

Other highlights of the vessel comprise “tailor-made services,” as well as “delicate contemporary and international cuisine,” CroisiEurope said.