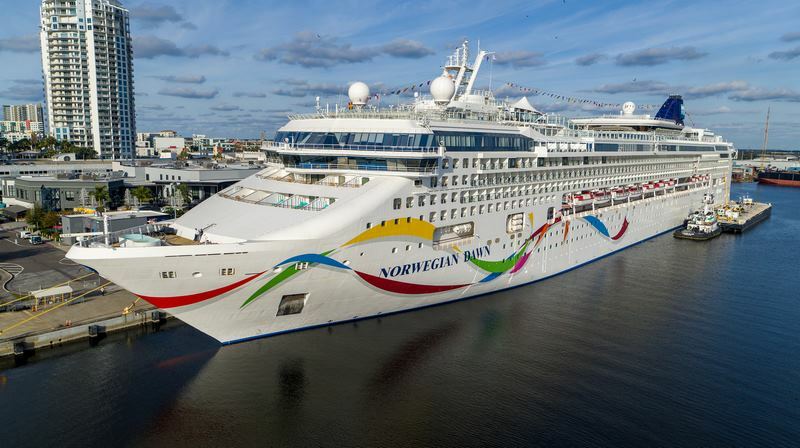 The Norwegian Dawn is completing 20 years in service this month. Operated by Norwegian Cruise Line, the vessel was christened during a special ceremony in New York City on December 16, 2002.

A few days later, the Dawn arrived in Miami for its maiden revenue voyage in North America, a seven-night cruise to the Western Caribbean.

Built by the Meyer Werft shipyard in Germany, the Norwegian Dawn was originally ordered for Star Cruises as the SuperStar Scorpio.

The cruise line – which, at the time, was part of the same business conglomerate as Norwegian Cruise Line – planned to use the ship for year-round cruising in Asia.

While the Scorpio was still under construction, however, Star decided to transfer the ship to the U.S.-based cruise line.

A sister to the Norwegian Star, the Dawn is part of Norwegian’s first generation of Freestyle Cruising vessels and can carry up to 2,200 guests in double occupancy.

Originally designed with a total of ten dining venues, the 91,000-ton cruise ship also introduced the concept of hull art – a feature that was later added to the entire Norwegian Cruise Line fleet.

Extensively refurbished over the years, the Dawn underwent a major modernization in 2016, as part of The Norwegian Edge program.

During the refit, the vessel received several new features, including Los Lobos Cantina, a Mexican specialty restaurant, and the Sugarcane Mojito Bar.

The design and décor in all of the ship’s public rooms and staterooms was also updated, including a complete makeover of the Garden Villas – which are still some of the largest suites in the entire Norwegian fleet.

Presently offering ten- and 11-night Caribbean cruises departing from Tampa, the Dawn is set to spend the next summer in Northern Europe before sailing in Asia during the 2023-2024 winter season.