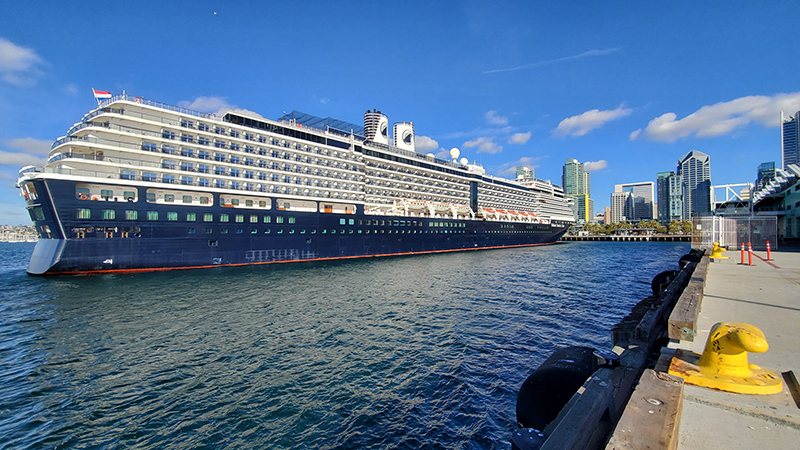 Holland America Line’s Zuiderdam is completing 20 years in service today. The lead ship of the brand’s Vista-class, the vessel entered service exactly two decades ago after being christened on December 14, 2002.

The naming ceremony took place in Fort Lauderdale and saw the broadcaster Joan Lunden serving as the ship’s godmother.

Soon after being christened, the Zuiderdam kicked off a year-round program of seven-night Caribbean cruises, sailing alternating Western and Eastern Caribbean itineraries from its Port Everglades homeport.

Following four years sailing exclusively in the region, the vessel debuted in Alaska in 2006 before sailing in the Mediterranean and other popular cruise destinations starting in 2008.

In another deployment move, the 2,000-guest ship is set to sail its first full world cruise in 2023.

Departing on January 3, the 128-night journey features visits to several parts of the globe including the Caribbean, Central America, the South Pacific, Australia, Africa and more.

At 82,000 tons, the Zuiderdam was the largest ship ever built for Holland America at the time of its debut.

Constructed by the Fincantieri shipyard in Italy, the ship introduced new features to the fleet, including panoramic elevators facing the ocean, and a higher percentage – about 80 percent of the total – of cabins with private balconies.

According to Holland America, the Zuiderdam was also designed to build upon the hallmarks of the brand, displaying extensive multi-million-dollar art collections and numerous dining options that include formal full-service and casual self-service venues.

Other trademark features of the company available onboard include the Explorers Lounge, the Ocean Bar, a covered promenade deck encircling the entire ship, a large Lido pool with a retractable dome, and Holland America’s signature “Crow’s Nest” observation lounge.

Completing the Vista Class, three sister ships later followed the Zuiderdam – the Oosterdam in 2003, the Westerdam in 2004 and the Noordam in 2006.