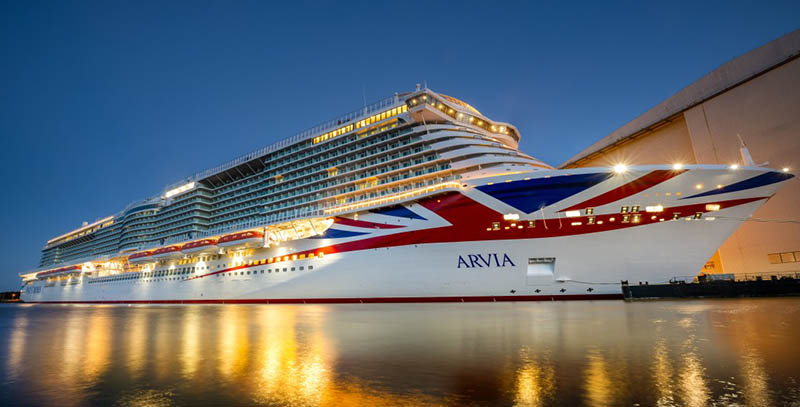 P&O Cruises’ newest ship, Arvia, will depart Meyer Werft in Papenburg on Saturday, November 5, 2022, when it will be transferred on the Ems River to Eemshaven, Netherlands.

The Arvia is expected to arrive in Eemshaven on Sunday, November 6, where it will be see technical and nautical trials before departing for Bremerhaven where it will be delivered to P&O Cruises.

The Arvia will be transferred to the North Sea with the help of two tugs, according to the Meyer shipyard. The Ems River barrier will be closed for traffic. The ship is scheduled to pass the dock log around 7:00 a.m. on Saturday and will pass the Ems barrier around 10:30 p.m.

The Arvia, sister ship to the Iona, which was delivered in 2020, is designed to accommodate 5,200 passengers. It is equipped with a SkyDome entertainment area featuring a swimming pool with a glass dome that can be opened.

The conveyance of the ship is expected to be completed on Monday, November 7.

The company’s newest ship will have a busy start to 2023 with a series of cruises in January. The first 2023 cruise aboard the Arvia is scheduled for January 6, when the ship will depart from Southampton, England and make stops at Philipsburg, St. Maarten, Castries, St. Lucia, St. Georges, Grenada before reaching Bridgetown, Barbados.