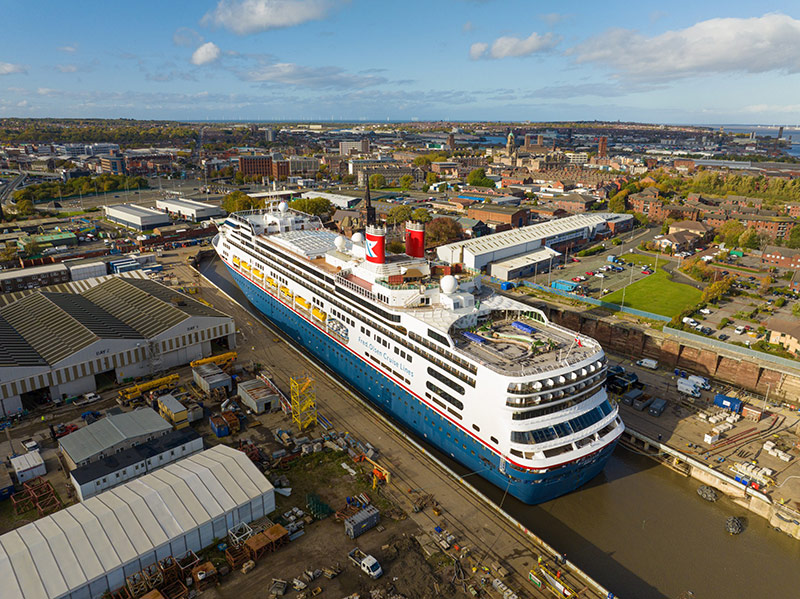 After arriving at the facility on October 28, the ship is set to go through a program of work that include steel repairs, as well as an overhaul of shafts and propellers.

The 1997-built vessel will also see the installation of a new incinerator and an underwater paint job before leaving the English drydock on November 14.

According to Fred. Olsen, over 150 employees of the Cammell Laird shipyard are currently working onboard the ship, where they are being joined by hundreds more from the facility’s supply chain.

The Borealis joined the Fred. Olsen fleet in 2021 after being acquired from Carnival Corporation.

Formerly operated by Holland America Line, the 1,320-guest vessel was built at the Fincantieri shipyard in Italy and originally sailed as the Rotterdam.

After resuming service in mid-November, the Borealis is set to offer a series of eight- to 11-night cruises to Western and Northern Europe departing from Liverpool.

In December, it will also offer a special two-week sailing to the Canary Islands.

Celebrating the holidays at sea, the cruise features visits to six ports in Spain and Portugal – including Funchal, where the 60,000-ton ship will remain docked for the city’s traditional New Year’s Eve firework display.

In early 2023, the vessel sails its first world cruise for Fred. Olsen, offering an 81-night voyage to North America, Hawaii, Asia, the Middle East and Europe.

The Borealis is the second Fred. Olsen ship to visit a drydock over the past months. In late August, the Balmoral saw one cruise cancelled due to an unscheduled visit to an English shipyard.

The drydock was necessary to fix a propeller issue on the 1988-built vessel, the company explained at the time.