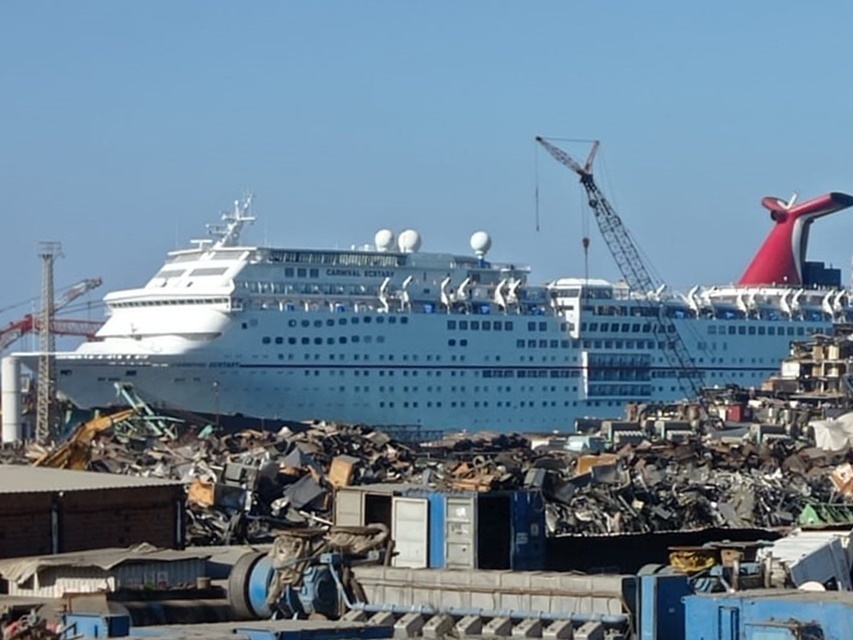 The Carnival Ecstasy arrived at its final destination earlier this week.

After wrapping up its cruising career in October, the former Carnival Cruise Line vessel was beached for scrapping in Aliaga.

One of the three remaining Fantasy-Class cruise ships, the 31-year-old vessel is now set to be recycled at the Turkish ship breaking yard.

During the process, the Ecstasy will be dismantled, with its building materials, fixtures and technical parts being sold off and repurposed.

Before crossing the Atlantic on its final voyage, the 2,040-guest offered a farewell season from March to October 2022.

The program included a series of four- and five-night to Mexico and the Western Caribbean departing from Mobile – the vessel’s last homeport.

According to Carnival, the ship carried nearly 5.5 million guests while sailing from eight different homeports during its three-decade cruising career.

Built in Finland by the Kvaerner Masa-Yards, the Carnival Ecstasy debuted as the second vessel of the eight-ship Fantasy Class.

Highlighted by a multi-story atrium, public areas with themed looks and a resort-style pool deck, the 70,367-ton vessel was the oldest in Carnival’s fleet.

A piece of Carnival Ecstasy memorabilia, a 1934 Rolls Royce Saloon that had been parked by the ship’s Rolls Royce Café will stay a part of the fleet.

The car became a feature of Carnival Celebration’s The Gateway – a two-deck area onboard Carnival’s newest vessel that highlights the evolution of its ships over the last 50 years.

With the vessel now gone, a total of six Fantasy-Class vessels have been retired by Carnival since the beginning of the COVID-19 pandemic.

The two final Fantasy-Class remain in service in North America.

Sailing from Jacksonville, the Carnival Elation offers year-round itineraries to the Bahamas, while the Carnival Paradise offers cruises to the Western Caribbean from Tampa Bay.