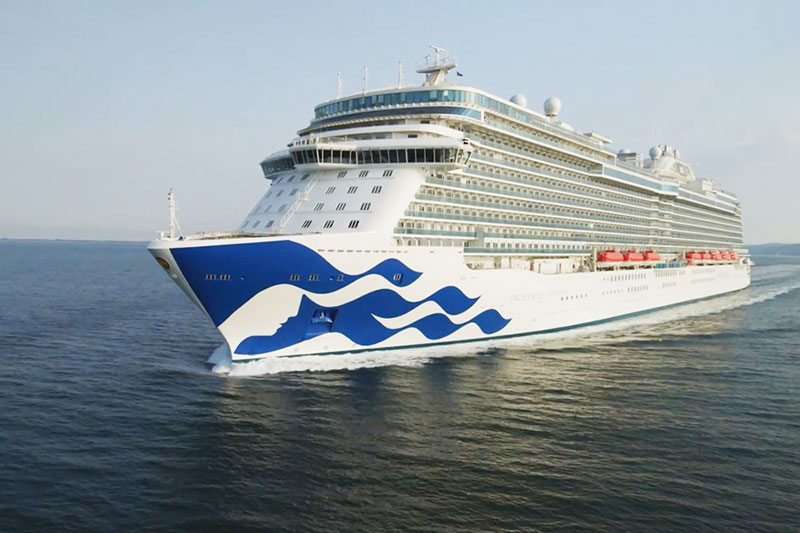 The Enchanted Princess just completed its first year in service for Princess Cruises.

Delivered by the Fincantieri shipyard in September 2020, the vessel remained out of service for 14 months due to the COVID-19 pandemic before starting revenue operations on November 10, 2021.

On that day, the Enchanted departed Fort Lauderdale for its inaugural cruise – a ten-night cruise to the Southern Caribbean.

In addition to Princess Cays, Princess’ private destination in the Bahamas, the itinerary featured visits to St. Thomas, in the U.S. Virgin Islands, and Roseau, in Dominica.

The Enchanted Princess also called in Curaçao and Aruba before returning to its homeport in Port Everglades.

Continuing its inaugural season, the 141,000-ton ship offered additional ten-night itineraries in the Caribbean through early April 2022 – when it repositioned to Europe.

Part of a six-ship program in the region, the Enchanted sailed in Northern Europe during the summer, offering itineraries to Scandinavia, the Baltic and more.

Now back in North America, the 3,600-guest vessel is set to sail a second season of ten-night Caribbean itineraries departing from Fort Lauderdale through March 2023.

Fifth in a series of six ships known as Royal Class, the Enchanted Princess follows the 2019-built Sky Princess in introducing new features such as the Sky Suites.

According to Princess, the balconies of the cabins – which measure over 90 square meters – are among the biggest of the entire industry.

With more than 25 dining venues and bars onboard, the vessel also offers new restaurants, such as La Mer, a French Bistro that debuted on the Majestic Princess.

The ship is also set to offer a new experience soon. Using 4K LED walls, the fully immersive 360: An Extraordinary Experience promises to transport guests to the Mediterranean through storytelling, cuisine, imagery, music, and scents.