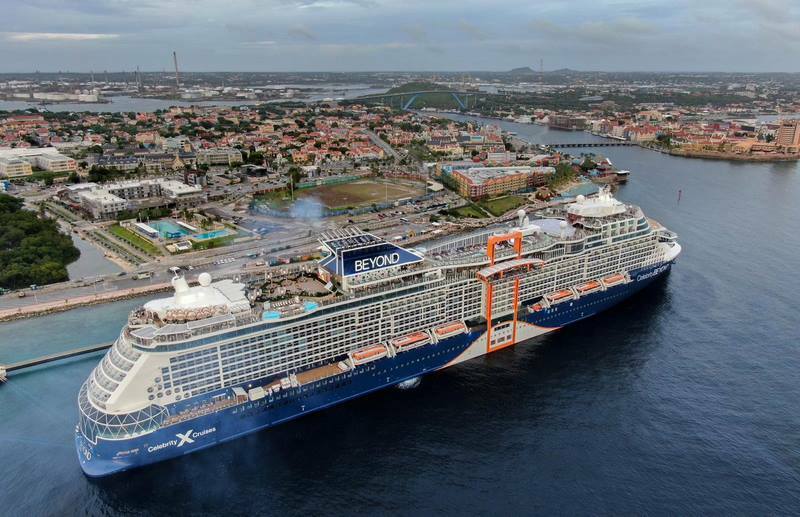 Celebrity Cruises’ newest ship, the Celebrity Beyond, made its maiden call in Curaçao on Monday, October 31.

The 2022-built ship called in Curacao on a cruise that left New York on Oct. 26, and was set to end in Ft. Lauderdale on November 4.

Before arriving at Curaçao on Monday, the Celebrity Beyond made a call to Kings Wharf. The ship is then set to visit the port of Oranjestad, Aruba before reaching Fort Lauderdale, Florida on November 4.

According to a statement from Curacao, the ship had 2,435 passengers aboard.

The Celebrity Cruises new addition, the Celebrity Beyond, is equipped with 32 food and beverage venues including specialty restaurants, bars and lounges. It also features a spa and fitness center, as well as a wide range of suites and private luxury accommodations called in the area labeled The Retreat, where guests can enjoy exclusive spaces and private dining experience, among other amenities.

The 327-meter long ship will depart from Ford Lauderdale to embark on yet another journey on on Sunday, November 13, visiting the ports of Puerto Plata/Amber Cove, Dominican Republic, St Thomas, US Virgin Islands, and Philipsburg, St. Maarten, before mooring in Fort Lauderdale, Florida again.

Another cruise ship, Norwegian Cruise Line’s Norwegian Prima, made its first visit to Curaçao on October 20. The ship is set to visit Curaçao again on its 11-night Caribbean cruise departing from Galveston, Texas and making calls in Cozumel, Mexico, Oranjestad, Aruba, Willemstad, Curaçao, on Nov. 6, Kralendijk, Bonaire, and Great Stirrup Cay, Bahamas before ending its cruise in Miami.