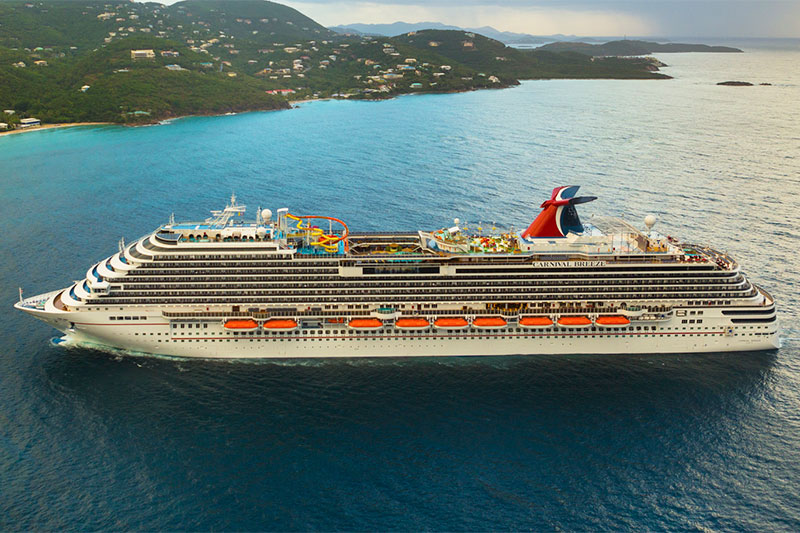 The 130,000-ton vessel was later christened during a special ceremony that took place at its homeport on December 10, 2012.

Tracy Wilson Mourning, founder of the Miami-based Honey Shine mentoring program, served as Breeze’s godmother and initiated the breaking of the traditional bottle of champagne on the hull during the invitation-only event.

Then the largest Carnival ship sailing from Florida, the 3,650-guest cruise ship continued to offer itineraries departing from PortMiami through late 2016.

With the Carnival Vista debuting in Miami, the Breeze repositioned to Galveston for a year-round schedule of Western Caribbean cruises that is still being offered today.

Closing out the Dream-Class, the vessel had first entered service in June 2012, offering a complete season in Europe.

The program included a series of 12-day itineraries in the Mediterranean departing from Venice, Italy, and Barcelona, Spain.

Following the Carnival Dream and the Carnival Magic, the Breeze offers all of the Dream-Class signature elements, including expansive facilities for children and teens, a 23,750-square-foot Cloud 9 Spa and The Lanai, an outdoor promenade featuring cantilevered whirlpools that extend over the ship’s sides.

Other features include a WaterWorks aqua park with a 300-foot-long corkscrew water slide, an indoor/outdoor café and live entertainment venue called Ocean Plaza and a wide range of dining choices, including Guy’s Burger Joint, Bonsai Sushi, BlueIguana Cantina and more.