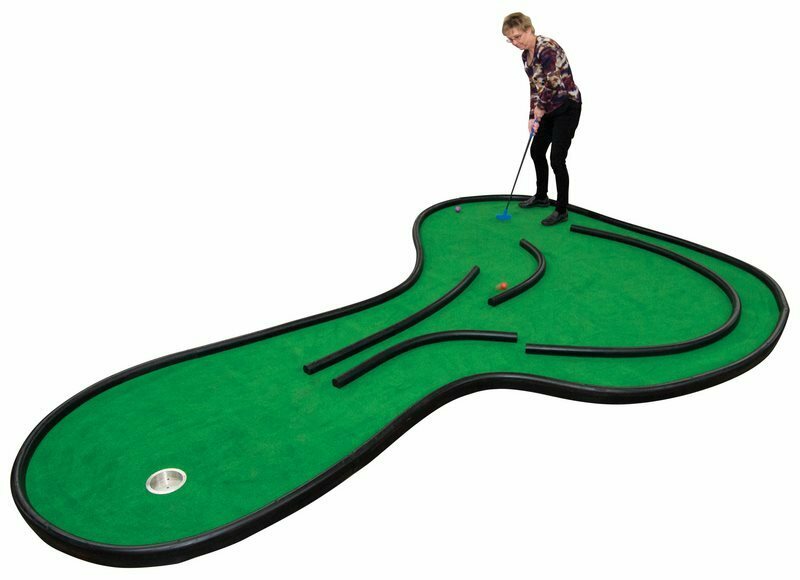 “This allows the ball to zing from one edge to another, if hit properly,” he said.

According to AGS, EdgeRider courses feature the new edge technology applied to their patented interlocking panel modular system. The edge technology can also be used on concrete golf courses where the owner seeks to replace a brick edge or provide a smooth edge inside an artificial rock edge, the company added.

This ball transfer design is not new, AGS said, and is offered in obstacles such as the Vortex and ‘Return to Me’ which can immediately change ball direction.

“However, the EdgeRider system goes well beyond those obstacles,” said Lundmark. “EdgeRider makes it possible for a ball to travel the length of a hole changing direction up to two or maybe three or four times, depending upon the speed. The proprietary extruded flexible rubber edge enables two ways for ball transfer. First with an edge mount and secondly with a center-mount attached on a fairway or green location.”

The ball transfer possibilities are endless, according to the AGS design staff, with EdgeRider creating many routes as a ball moves from tee to green allowing up to six routes to the hole cup.

“Since the 1950s, many courses have relied on geometric designs where a player putts a ball, which then caroms off one or more golf hole edges, changing direction as it seeks a hole-in-one,” comments AGS chief designer Arne Lundmark.

“In the past 30 years, course design has become less geometric and more curvilinear with free-flowing designs, curved bumps and topography that guide a well-aimed ball to its destination. The EdgeRider system relies on a science concept called ‘curvilinear motion,’ which is the motion in which the velocity of a body is variable, and the path of the body is in a curved line,” he added.

Both nine- and 18-hole courses with putters and balls are available. The product can be installed as a temporary or permanent mini golf installation, indoors or outdoors, on a cruise ship deck, on rooftop venues or even used at special events.