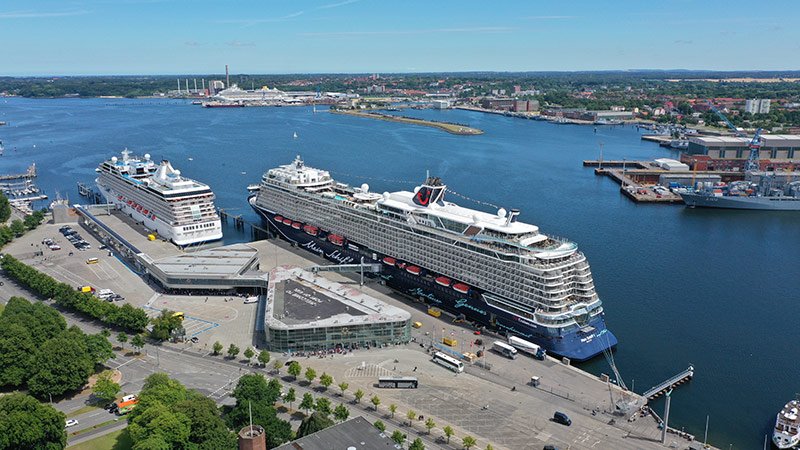 The Port of Kiel has seen a record-breaking total of 243 calls during the current cruise season, which comes to an end next week when the Vasco da Gama docks at Ostseekai, an increase of roughly 40 percent in comparison to 2019, according to a press release.

This season, half of all maiden calls were made by U.S. brands such as Carnival Cruise Line, Norwegian Cruise Line and Regent Seven Seas Cruises, and ships Hurtigruten also made their first calls at the port.

“We are particularly pleased that after several years of planning we have succeeded in increasingly attracting international shipping companies to Kiel,” stated Dirk Claus, managing director, SEEHAFEN KIEL GmbH & Co.

Another notable statistic from the current cruise season in Kiel is the number of transit calls, which was 34, far exceeding previous years’ figures. 70,000 of the total 834.431 cruise passengers visited Kiel as a travel destination alone, while they created an international flair in the state capital during the high season, according to the port.

The port is also a pioneer in the expansion of shore power infrastructure for ships in Europe. In addition to the daily supply of Stena Line and Color Line ferries, the company has been focusing on a low-emission power supply for cruise ships since 2021.

Following successful technical tests this year, the AIDAprima, as well as the Mein Schiff 4, Mein Schiff 6, Artania, and Nieuw Statendam, were berthed emission-free in Kiel. Other ships have begun to integrate this year and will continue throughout the upcoming season.

“Our conclusion after the first full shore power season is that the ships at the Ostseekai find an excellent infrastructure and employees with extensive know-how that make integration from our side possible without any problems,” said Claus.

This season, 19 calls were supplied with European green electricity, though more commitment to sustainability is expected from cruise lines in the future as Claus added.

As one of only 29 cruise ports worldwide with suitable infrastructure, the port expects the number of calls supplied with shore power to triple in the coming season. Two additional facilities are already planned for Kiel and are expected to be completed by the end of 2023, supplying the cruise terminal at Ostuferhafen.