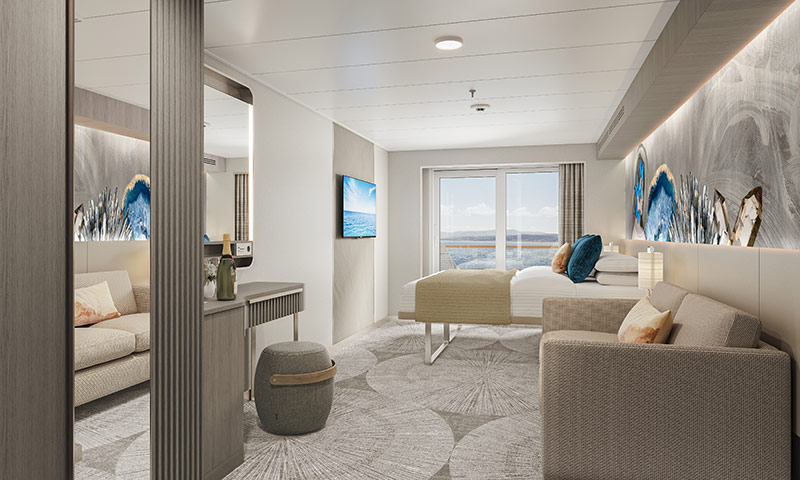 “When you walk through the ship there is a cohesive tie to how everything flows and fits from a design perspective,” said Studio DADO’s Greg Walton, founding partner, on the new Norwegian Prima (pictured above).

The Miami-based design firm, which has grown to 22 employees, was responsible for the majority of venues and staterooms on the new ship.

“Everyone wanted this ship to feel light and airy and not dark and heavy,” Walton continued.

“There was overall direction given by the client very early on. There was a meeting in Trieste with all the architects about what Prima was going to be and how it was going to evolve and lift the brand.”

The design concepts behind the Norwegian Prima’s staterooms started at the end of 2016.

Walton, who said the company has to “future cast” designs, can start working on concepts up to six years in advance.

The Prima’s balcony cabins are the largest in the fleet, doing away with the interlocking stateroom concept and ushering in a new color palette. 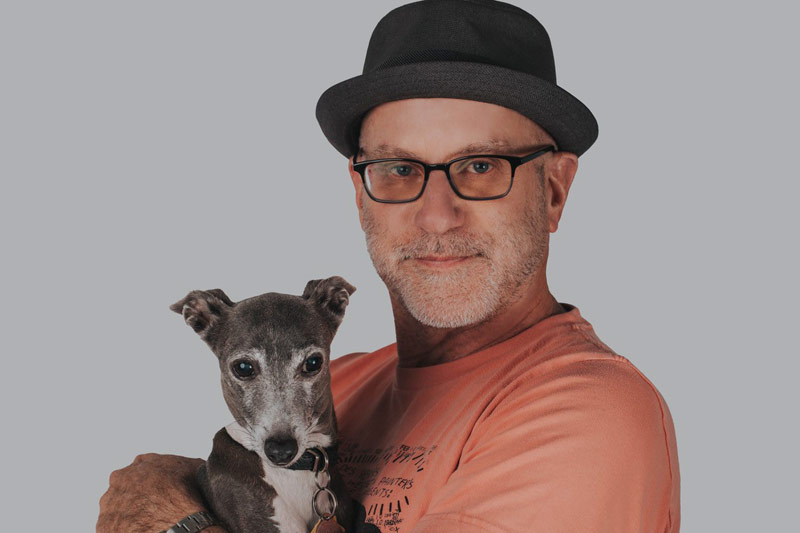 “The biggest thing that drove us in changing the color palette was to create a space that was restful, peaceful and relaxing for the guest,” Walton told Cruise Industry News.

Prior thinking in the cruise industry wanted guests out of the cabin, out and about on the ship, said Walton.

“Now, people want to nest for a couple nights when on a vacation. Especially after a day of shore excursions,” he said. “Part of the color palette was driven by creating a restful, peaceful place.”

Other design adjustments to present a larger-looking stateroom sees the bathroom wall curve slightly in, opening up the room visually for passengers entering the space.

In addition, there is no coffee table in front of the sofa and there is no bed skirt and a higher bed.

“It’s designed so you see the floor passing under the bed so it helps open up the space,” Walton explained.

Atrium: Heart of the Ship

The multi-deck atrium aboard the Norwegian Prima was designed for guests to spend time in and has become the heart of the ship.

“On past ships, you’d walk through it and there would be three people sitting there,” Walton said. “No one stayed in the atrium. It was a passing space. We wanted this atrium to be a space where people stayed.” 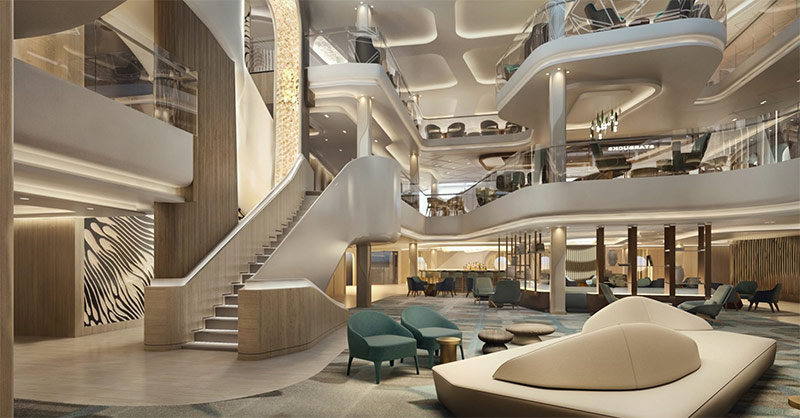 “We spent a lot of time … we looked at famous places around the world and famous gathering places such as the Spanish Steps, Piazza San Marco in Venice and Times Square in New York. We looked at what makes these spaces keep people.”

The company thus focused its attention on the entry points and edges of the space.

“We had no control over how we enter the space, that was set by the general arrangement. What we had control over was the edge and how we defined and sculpted the space. Much to the initial shock to the shipyard, we decided to cut a hole for the atrium that was not symmetrical and was not the same shape from one deck to another,” Walton said.

“That was a structural challenge for the shipyard, but they rose to the occasion with Independent Maritime Advisors.”

The atrium ties together lounging areas with retail, two bars, Starbucks and guest services. Extra space on the port side has expansive windows for guests to take in views.

“A lot of people criticized us about putting retail in the atrium, but that activates the atrium, especially on sea days,” he continued, underlining the atrium is mirrored to what makes spaces successful in an urban environment. “A lot of people asked about Starbucks. It’s going to activate the atrium just like an incredible bar or restaurant activates Piazza San Marco.

“You can make an atrium where it is the hub and the piazza of the ship.”