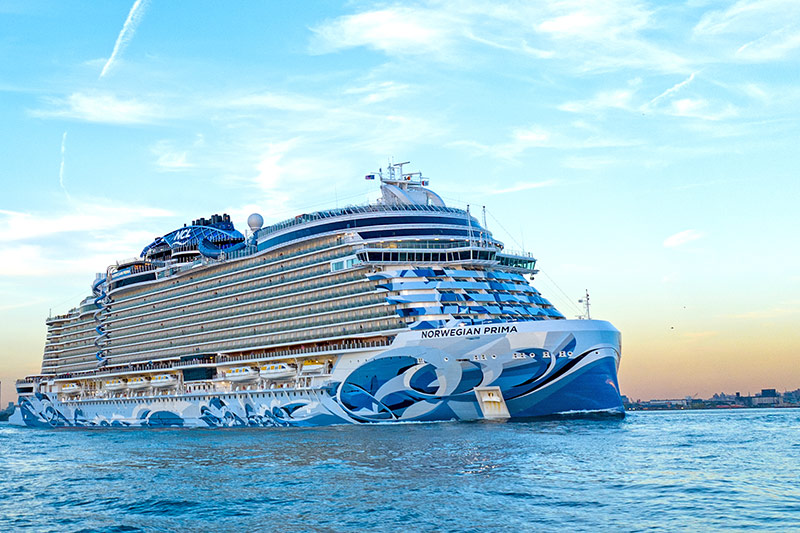 There are a variety of activities guests can participate in for a charge, such as go karts, slides, simulator games and more. In addition, the complimentary dining is designed in such as fashion as to incentivize guests to sample the à la carte specialty dining options.

While not detracting from the modern cruise experience, the onboard experiences that carry extra costs flow to the cruise line’s bottom line.

The Norwegian Prima features a number of unique guest activities, including a three-deck 420-meter long go kart track known as the Prima Speedway; four nearly free-fall dry slides that drop 10 decks and are said to be the fastest at sea; and a high-tech game venue called the Galaxy Pavilion with everything from escape rooms to racing simulators. In addition are modern versions of darts, interactive mini-golf and more.

Simon Murray, vice president of guest experiences and innovation pointed out the dart game concept in the Bull’s Eye venue as one of his favorite spots.

The ship is dedicated to providing the best gaming experience, according to the ship’s daily program. The casino is a large venue with slot machines and table games.

The pool deck has a tidal wave waterslide, a waterpark for children and a venue called the Splash Academy where children can participate in what the cruise line calls creative play, sports and more.

There is also a fitness center and spa as well as two infinity pools that literally blend into the ocean.

Complimentary dining options include two main dining rooms that both serve the same fixed menu for the duration of the cruise.

Other complimentary dining options are casual and relatively limited in terms of seating capacity, such as the self-service Surfside Café, the Indulge Food Hall with 220 seats inside and 120 outside, and the Local Bar and Grill, thus encouraging guests to explore other options, such as the à la carte venues.

During a preview cruise in August, the Norwegian Prima put on some very good entertainment, a recreation of the popular TV show The Price is Right that had the audience totally engaged, and The Donna Summer Musical, a stunning, Broadway-quality production with perhaps the largest cast at sea that earned a standing ovation from the audience.

The 85-minute production narrates Donna Summer’s rise to fame, with three performers playing her at different stages of her life and features more than 20 of her hit songs.

Other entertainment venues include Syd Norman’s Pour House, promising to relive the glory days of rock ‘n’roll, and the Improv comedy club. Musicians and singers also perform in other venues such as the Local Bar & Grill and the Penrose Atrium.

The 750-seat Prima Theater that transforms into a disco at night, Studio 54, as the seating retracts.

The traditional Promenade Deck, which is hard to find on cruise ships these days, has been reinvented as the Ocean Boulevard and allows guest to stroll all the way around the ship, including a section called the Ocean Walk featuring a glass floor.

According to Norwegian, the Prima is the most spacious new cruise ship in the contemporary category and offers the most outdoor deck space and expansive accommodations of any newbuild, which may command premium pricing on top of the onboard spend.

So, when all is said and done, the class of ships is expected to make a significant contribution to Norwegian’s bottom line.